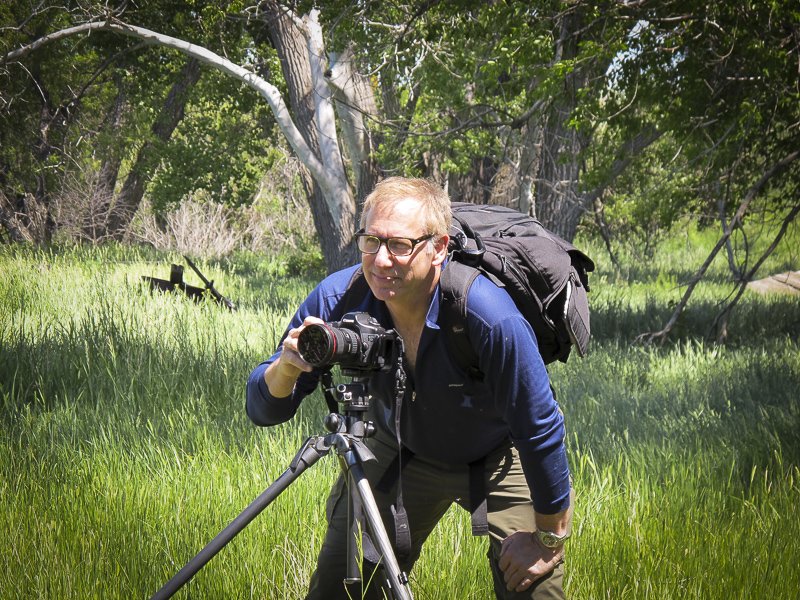 That’s a question I get asked all the time. I started shooting with film way back when, using a Kodak Hawkeye. Which I still have, by the way. In high school, I graduated to one of my mother’s old 2 1/4 roll film cameras. Most of those negatives were stolen in a move to a new apartment in Chicago, back in the early ’80’s. By then, I’d gotten my first SLR, a Minolta, with a couple prime lenses. I had a couple of Argus C-3 rangefinder cameras. And my first professional camera: a Minolta Maxxum 7000, which I won at an advertising event in 1989 or thereabouts. That camera went to Europe with me, and travelled from Norway to Italy to France and back again. It was the first camera I owned that had auto-focus, which worked passably well. Took some getting used to however.

Nowadays, I’m a little more sophisticated. I converted to digital SLRs around 2005, when I first started doing art festivals. I’d had a couple of consumer-grade digital cameras before, but this one used good glass, and shot an 8MP image. Since then, I’ve had three full-frame Canon bodies: a 5d, and 5dMkiii, and a 5dSR. I still have the last two. When I wanted a smaller lighter camera, I jumped on the Sony bandwagon with the Nex-7. That little camera shoots an APS-C frame at 25MP, almost four times the size of my original 20D, and the entire package weights a bit over 4 pounds, with two zoom lenses, batteries and cards. The Sony proved to be an excellent backpacking camera, which I’ll cover in another post. This past fall, I upgraded to the Sony 6400, which is a beautiful little camera. Still APS-C, still lightweight, still brilliant for going light.

I have a number of different kits, depending on the assignment. In the studio, I favor the old Mole-Richardson hot lights. They’re heavy, they are very controllable, with fresnel lenses that go from spot to flood with the flip of a lever, and they give a light that isn’t easily duplicated with strobes or LED lights. I also have an older set of Lowell Lights — 2 Tota-Lights and 2 Omni-Lights. This kit is great for location work in an office or factory environment where continuous lighting is needed, but portability is key. And I have a couple modern Dracast LED panel lights that make great fill or bounce sources for video. B&H Photo often has the Dracast lights on special, so if that’s something you are interested in, keep an eye for them. For still life and product shots, I have a Calumet/Bowens monolight kit. This lets me set up a big soft key light and a smaller strip light for fill. With a couple of Canon Speedlights, this is a great strobe setup.

No photographer should be without a good tripod. My trusty Gitzo has been with me for fifteen years, and while the rubber around the leg locks is getting a bit worn, this carbon-fiber tripod is as good as it was when it was new. It’s paired with a Really RIght Stuff ball head. For travel, I carry a 3-Legged Thing that folds up to fit into a carry-on bag. The TLT went to New Zealand with me, and was perfect for general stability. It has a little ball head that can support the heavy Canon bodies as well as the lighter Sony kit. Video requires more support generally, and for that I have a twenty-five year old Manfrotto with a video head. I also have a Manfrotto video remote that allows me to trigger the camera from the pan/tilt lever, and focus the camera. For more complex production, either of the Canon bodies can be fitted with an iKan follow-focus.

My audio needs in the field are pretty spartan. A Rode VideoMic and a Zoom H4N are used to capture audio, along with a cheap pair of headphones. Back in the studio, it gets fed through a Focusrite Scarlett audio interface into a MacPro. Most of my old outboard equipment doesn’t see much use anymore: a 12 channel Mackie mixer, various sound-processing modules, and my trusty old friend, the Teac 3440 4-track reel to reel recorder.

← Previous Link: Addendum to St. Barbara's Church Next Link: The View from Here →