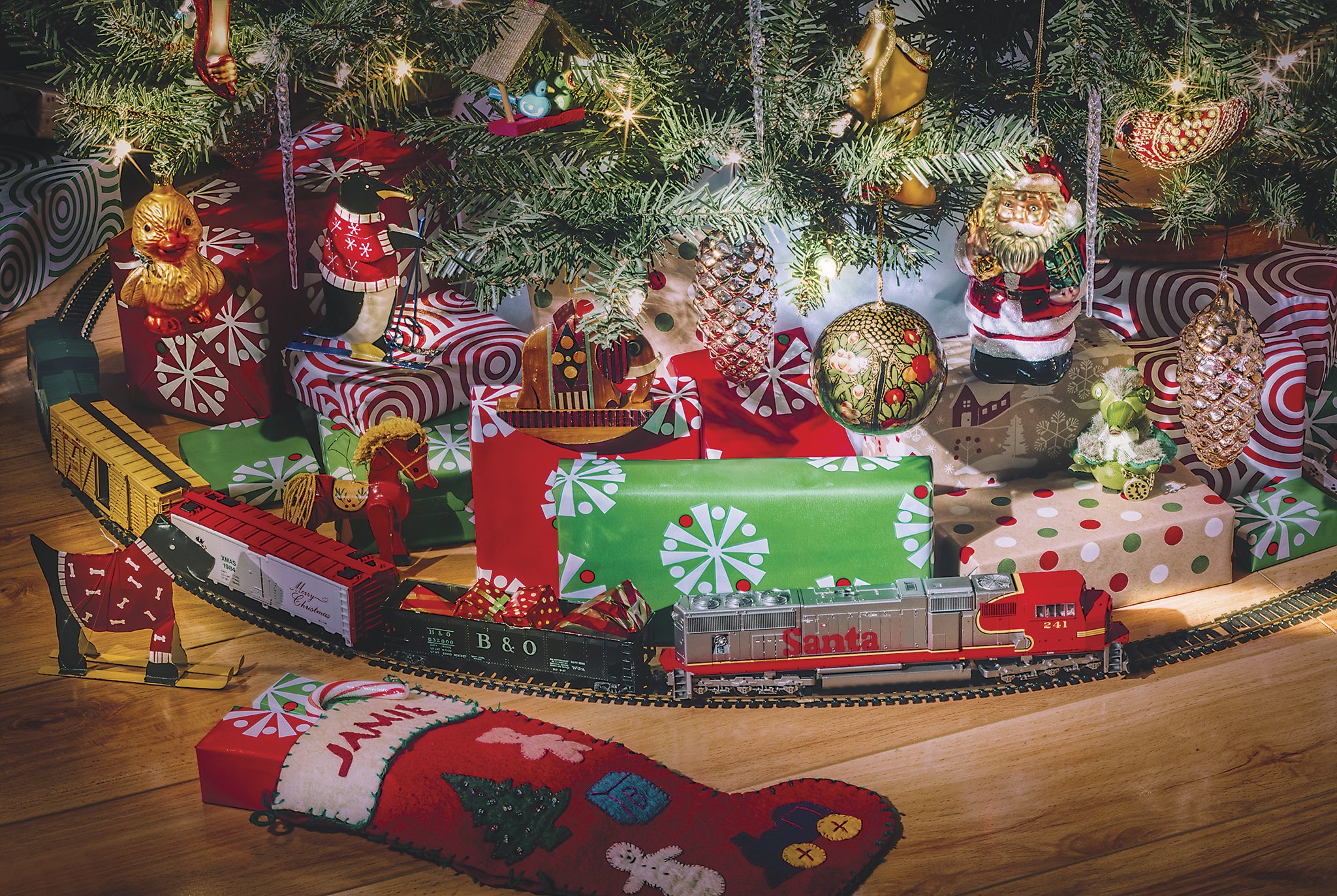 Every year, Kozo and I send a Christmas card to friends & family. Years past, I’ve used a wintry landscape shot… a hay bale with a red bow around it, a buffalo with a Rudolf-inspired schnozzola. So this year, in keeping with some of the interior studio shots I’ve been making, I wanted to do something a little different.

Shooting in the studio requires a bit more preparation than just going out and finding an interesting picture. As a former art director, I start out with a concept, and a layout. Since this layout isn’t going to be presented to a client, I can get away with a lot more than I did in the old days. 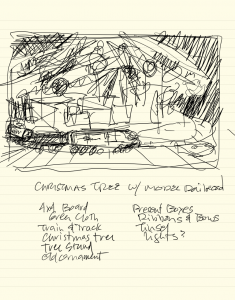 Sketch of the idea

I use an app (GoodNotes) with my iPad to sketch — it’s easier than keeping track of 10 different yellow pads, and I can sync it via iCloud to my desktop machines for use in a blog for example. The Apple Pencil is by far the most responsive pressure sensitive tool I’ve used. Better than a Wacom even, for simple sketching. I wanted something that captured the magic of coming downstairs on Christmas Eve and seeing the tree all lit up, with the toy train magically making it rounds, waiting for Santa to arrive with a bag full of goodies.

Once I had the idea, I went looking for a pre-lit Christmas tree. Initially it seemed as if an old-fashioned feel would be nice, so I got some larger colored lights, and brought out my HO scale trains. I soon realized that the scale of the train, while it worked well for a real Christmas tree, was a bit small for the height of the tree for the base. It was a struggle to make up the space between the lowest tree branches and the train. I shot some test images with my phone, and then set up the tripod and camera. Initially, I tried a wider lens, my Sigma 35 Art f1.4 which is a beautiful lens that lets in a lot of light. But the depth of field was too shallow, and the tree looked messy no matter what angle I tried.

I switched to a longer lens. Having limited space in the studio, I fitted the Canon L 70-200 f2.8. A higher angle helped to minimize the distance between bough and track. Lots of little packages had to be wrapped and staged under the tree. The colored lights proved to be another scale problem, so the old-time angle was somewhat abandoned. The train also dates back thirty years, not fifty, and so I experimented with various combinations of locomotive and rolling stock until I had a basic feel for what I hoped to accomplish.

After I had the train track set up in position, I wrapped the tree stand with a white tree blanket to hide the ugly black legs. Staging the presents around the tree, and working to the camera, I started to get some of the feel I was looking for, but I still wasn’t getting enough emotion.

I decided to press on, and hang some ornaments to get a better feel. Lighting had not been set up yet — I typically will just use a big 1K Baby bounced off the ceiling as a work light, and while it’s not terribly dramatic, it does let me see what’s going on with the set. There were some big holes between the tree and the track that definitely needed filling. As I hung ornaments, it became apparent that using an artificial tree was going to help me, as the branches could be bent, and would hold their shape much better than a live tree. Score one for fake trees! 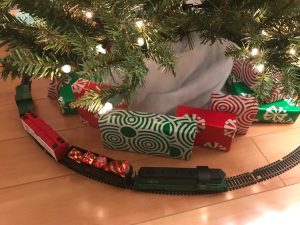 At this point, I was ready to do some real test shots. The camera was locked down with some sandbags holding the tripod steady — I have a tendency to stumble into things and wreak havoc on a delicate camera position. Still using the broad overhead light, I fired off a couple of brackets to see how everything lined up. The shot was still looking pretty bland. Colorful, yes. Dramatic, not so much.

Out came the small Mole Richardson “inkies”. These are tiny little tungsten luminaires, with 150-250 watt bulbs, and the ability to block off the light with barn doors. They have fresnel lenses so they can be spotted down, or flooded out. Perfect for old-style drama. These are my favorite lights — I like them over the big studio strobes, my LED flat panels, or the documentary style Lowell lights. For this shot, I didn’t need a lot of light. After all, it’s supposed to be night time. We’re waiting for Santa!

Working in low light situations is interesting. It helps to tether the camera to a laptop so that focus can be determined more precisely. Canon has a utility that they ship with their professional cameras that lets you do this. Unfortunately, it doesn’t function well under Mac OS Mojave, which is what the laptop is currently running. Lightroom has a basic tethering capability, but it doesn’t let you control the camera remotely. 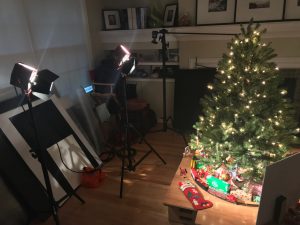 Enter Kuuvik Capture. When I discovered that Canon Capture wasn’t updated for Mojave, some Googling brought me to this lovely bit of kit by Laszlo Pusztai — Kuuvik Capture. It runs independently of Lightroom, saves images on the laptop and on the camera’s capture card. It allows remote focus from the computer, as well as setting up brackets of 3-15 exposures, interval shots and more. And of course it’s not cheap. But it is a finely written professional tool. Very useful. I tried adding tinsel to the tree branches. Still going for that nostalgic feel I remembered from my youth. It looked horrible. Luckily it didn’t take long to decide to ditch that idea. Quite a bit of time was spent in noodling ornaments, repositioning boxes, eliminating odd overlaps, and getting everything still enough to stay sharp during the long exposures the shot required. I did a five-exposure bracket, with steps in 1 and 2 stop increments. To get the spectral highlight on the white lights I had the lens stopped down to f32, so my lightest exposure was 30 seconds. 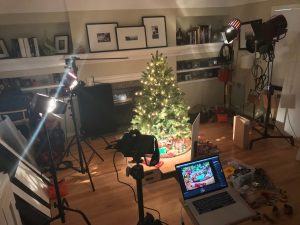 The Burlington locomotive proved to be a bit dark for the scene. Down at Empire Train and Hobby in Troy, they hooked me up with a beautiful little Santa Fe DSD75M. The color works better with the shot, and of course it says “Santa” on the side! A few little packages in the hopper car add to the feel, along with a Merry Christmas boxcar from the 80’s. Kozo used to buy new rolling stock for the layout every year until we stopped putting the train out with the tree. (Our cat Sasha liked to derail the cars when they were moving.)

Adding another light to fill in the background a bit seemed to help define the caboose a touch. An out of sight mirror, some fill cards pushed little shafts of light around the set. Kozo suggested changing out one of the packages because the pattern seemed overly intrusive. Did that, it was a good suggestion. 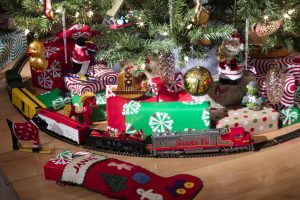 Along the way, it should be pointed out that the brackets for each shot are combined into one image, using Aurora 2019. The shot above is a single exposure out of five in each bracket, without any post-production work. When I finally got an image that I was satisfied with, I made the HDR composite and then brought it into Photoshop for additional editing. The flooring on the left was extended, some minor issues with wrapping paper were fixed, and some reflections were cloned out. And then, the Photoshop edit was further refined for drama inside of Lightroom, where some additional emphasis was added, a vignette around the corners was placed, and some other magic waved over the file.

Here’s the final product. I hope you like it — if you’d like a copy of the Christmas card, please drop me an email at info at parkerparker.net with your name, address and what you’d like Santa to bring you for Christmas!