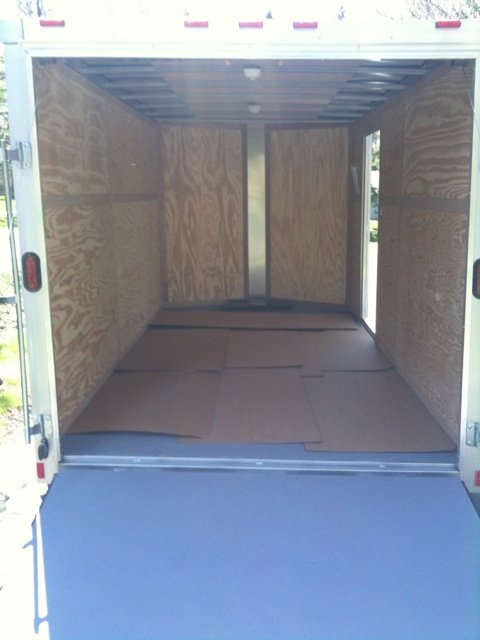 Inside of the new trailer

In the aftermath of the Main Street Fort Worth show, I had some time to reflect on what was working and what wasn’t with my transportation systems. After a lot of thought, a few sketches and some conversation, I decided to go with a setup similar to the one I had before. Of course there are a lot of options for getting your stuff to and from shows. Many artists are opting for Dodge/Mercedes Sprinter vans now, which have more headroom, run on diesel fuel, and are easy to maneuver into tight show spaces. Many artists still use the standard Ford E250 white van. A few tow a trailer behind a truck camper. But I’ve been set up to tow a standard tag-hitch trailer behind my Toyota Tundra, so that’s what I decided to stay with. I can’t use a Sprinter because of the two large bin boxes, and without rethinking that whole system, it was easier to stay with a truck/trailer combination.

About three weeks after returning from Fort Worth, I placed an order with my dealer for a new Wells Cargo Road Force trailer. As it turned out, I was able to drive to Elkhart and pick it up. I bought one that was in stock, saving about six weeks build time. It wasn’t quite what I wanted, but close enough. 14′ length, 7′ width, an extra six inches in height, a modified v-front for aerodynamics, dual axle with electric brakes, ramp in back, door on the side. A nicely built trailer.

After I picked it up, I spent three weeks building a rack for the panels and a new pole cart. I also built big drawer units that hold mats, frames, glass and other supplies. Shelves were constructed in the front of the v to make use of the wasted triangular space. I installed a spare tire hanger up high, to get it off the floor. I also had to build a new unit to carry larger framed work, because the two boxes that handled my 30×40’s were stolen with the Artanic. Luckily, the weather cooperated, and I was able to use the driveway to spread out to make the various parts and pieces. 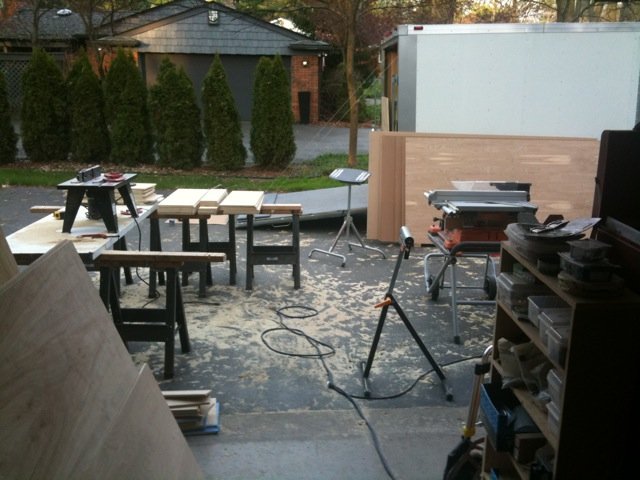 Building panel racks and shelves on my driveway 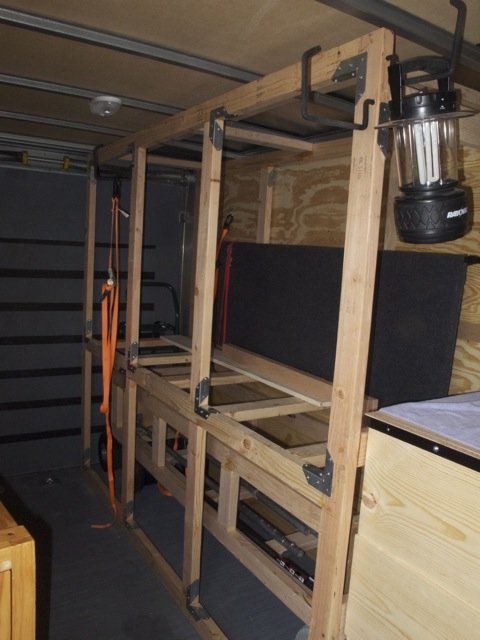 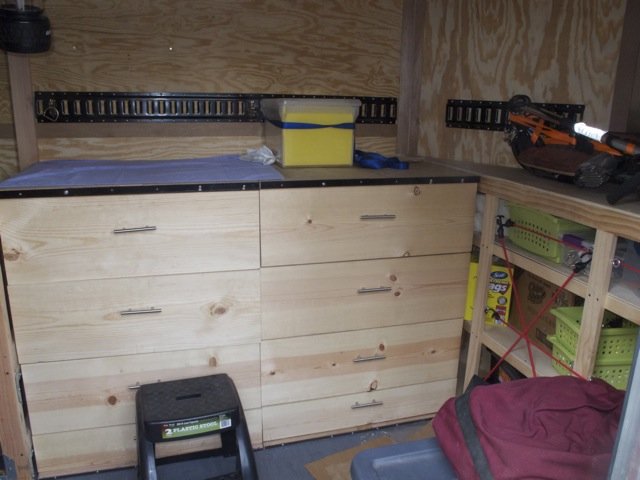 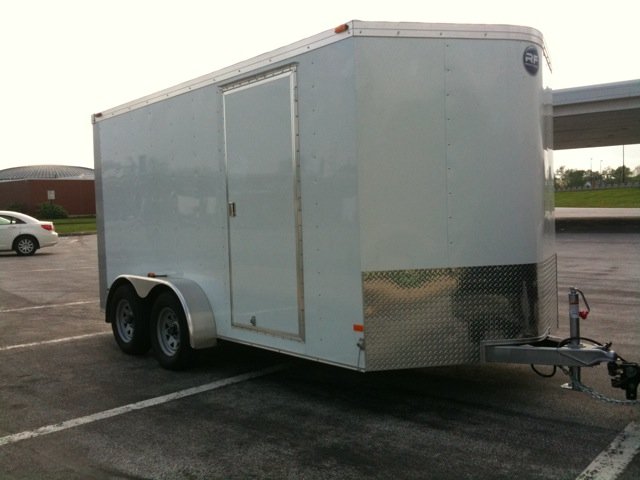 I had to build a ramp flap on the back ramp, as this trailer didn’t have the extra piece. Ordered a 6′ steel hinge and drilled holes for large screws and installed that. I built a rack to hold the four 75 2″ steel weights near the front door. I used to have to stow them on the floor and they would slide around. The rack holds them in place vertically in the 12″ space between the door and the v — a space that would normally be unusable. The ladders stow behind the panel rack so that they are easily accessible for setup and teardown. The two print bins weren’t stolen, so they stay in the same place in the back. I installed e-track along the door-side wall, and in the v, to secure various boxes and bins. I also bought industrial strength ratchet straps with e-track attachments, which are vastly superior to the Home Depot variety in strength and durability. A good source for e-track and cargo control is US Cargo Control.

All in all, this trailer is more efficient than its predecessor. It’s quicker to unload and load. Lessons learned from the first two trailers proved invaluable here. Little things like bigger ladder hooks to stow light bars and hang a lantern from, the weight rack (not seen in the photos), the spare tire hanger — all of these items help keep the trailer neat and tidy.

And the Road Force with the torflex axles rides smooth as silk. Items don’t shift in transit. It doesn’t quite get the mileage that the Artanic did (10 mpg vs 11mpg), due to the flatter v-front. But the 4′ v on the Artanic added weight without being very useful storage space. Probably a good trade-off.

And the final touch: security on the trailer. When we leave it parked, it gets two wheel boots, one on each axle. The hitch gets locked up with a gorilla guard and a padlock through the hitch release. Hopefully it won’t get towed off like the Artanic. The wheel boots are Titan Grips, from Universal Security. They take about ten seconds to install, and don’t take a lot of space on the trailer when not in use. 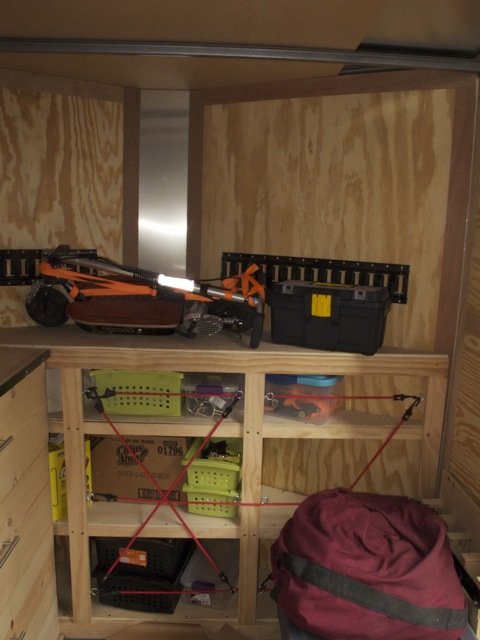 Bungie cords keep small bins from flying out of control

And we’ve had the opportunity to test it out on the road several times now. It’s been to ArtBirmingham, Northern Virgina (Reston),  the Columbus Art Festival and Chicago’s Wells Street show. It’s a bit easier to park and maneuver due to it’s slightly shorter wheelbase, and it’s easier to load and unload. There aren’t any barriers in the middle like the old had. I did have to build a ramp for the side door, for emergencies when I have to unload something in the front without taking everything off the back first. But it’s essentially done.

I’m thinking about print storage like I had on the old trailer — 6 boxes to hold prints in alpha sort. But that can wait. The drawers hold an awful lot, more than I expected, so I have some time to see if the additional box is needed.

We named the third trailer, of course. His name is Arthur, sort of an abbreviation of Art and Third. A faithful beast of burden…