Some tips for backpacking with a camera 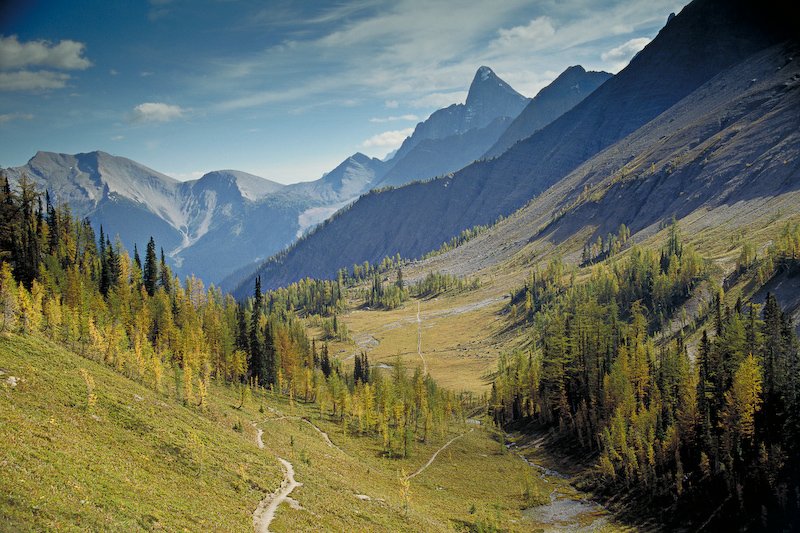 I’ve done a lot of packing with cameras and gear over the years, and every year I carry less and less. This past summer I went on a three day trip with nothing but a Canon G11, instead of carrying my 5D and lenses. Once I got used to the limitations of the G11, it was a joy not to lug an additional 10 pounds of camera gear over rocky trail-less terrain. I often scramble around in the rocks, and do some climbing, so lighter is generally better. 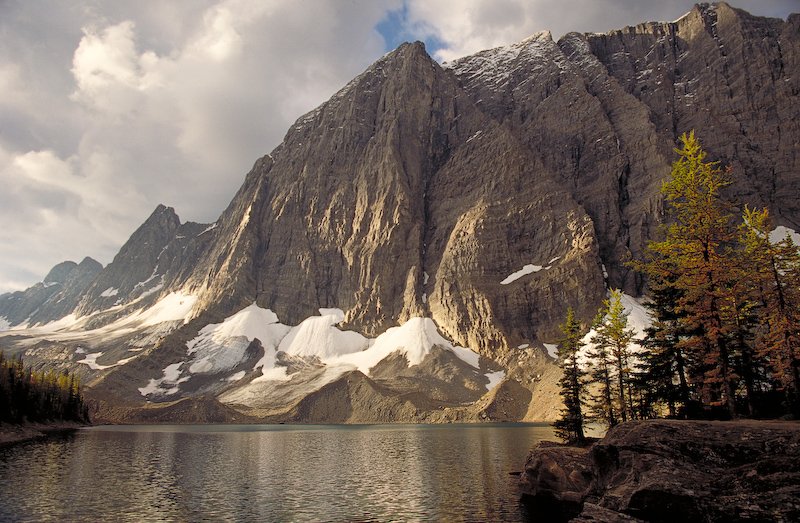 The best strategy for carrying professional camera equipment into the wild is to pare your gear down to the bare essentials. And that includes the camera kit. On my first backpacking trip to the Canadian Rockies, I carried a SLR body, a 24-85mm lens, a 70-300mm lens, a full complement of graduated filters, polarizers, a bunch of film, and a small compact tripod. I also carried my own stove, tent, food, water and way too much clothing. All told, my load was close to 60 pounds for four days, and 20% of that was camera gear. Since then, I’ve gotten  the load pared down, and I can get along with about 25 pounds for a long weekend, with an additional 5-6 pounds of camera gear. Tailor the load to the assignment. If you plan to shoot golden light landscapes, leave the long zoom in the car. If you plan to shoot wildlife, leave the ultra wide lenses behind. It’s hard to stay focussed if you are too tired to lift the camera at the end of the day from carrying a sixty or seventy pound load up 4000′ of vertical trail. You may miss some shots if you don’t have the proper lens, but you will miss more shots wasting energy carrying gear you may only use once.

That said, to carry more than a single lens and a tripod into the backcountry, you will want a backpack that has good size wand pockets and lash spots or side compression straps to carry the tripod on the outside. Keeping the load centered is ideal, but a tripod cantilevered on the back of your pack will definitely tip you backwards. Carrying the lenses and cameras so they are accessible is another big issue. A good sized top pocket is usually the best option, but will make the pack top heavy and awkward to maneuver. Best thing is to experiment and find what works best for you. Take your gear into the store when trying out backpacks, and see what works.

One option is to carry the camera and working lens outside the pack, in shooting position. I have used a Zing case, but with today’s large glass, my old case doesn’t fit my camera. Anything that will relieve weight on your neck and keep the camera close to your chest for shooting will work. 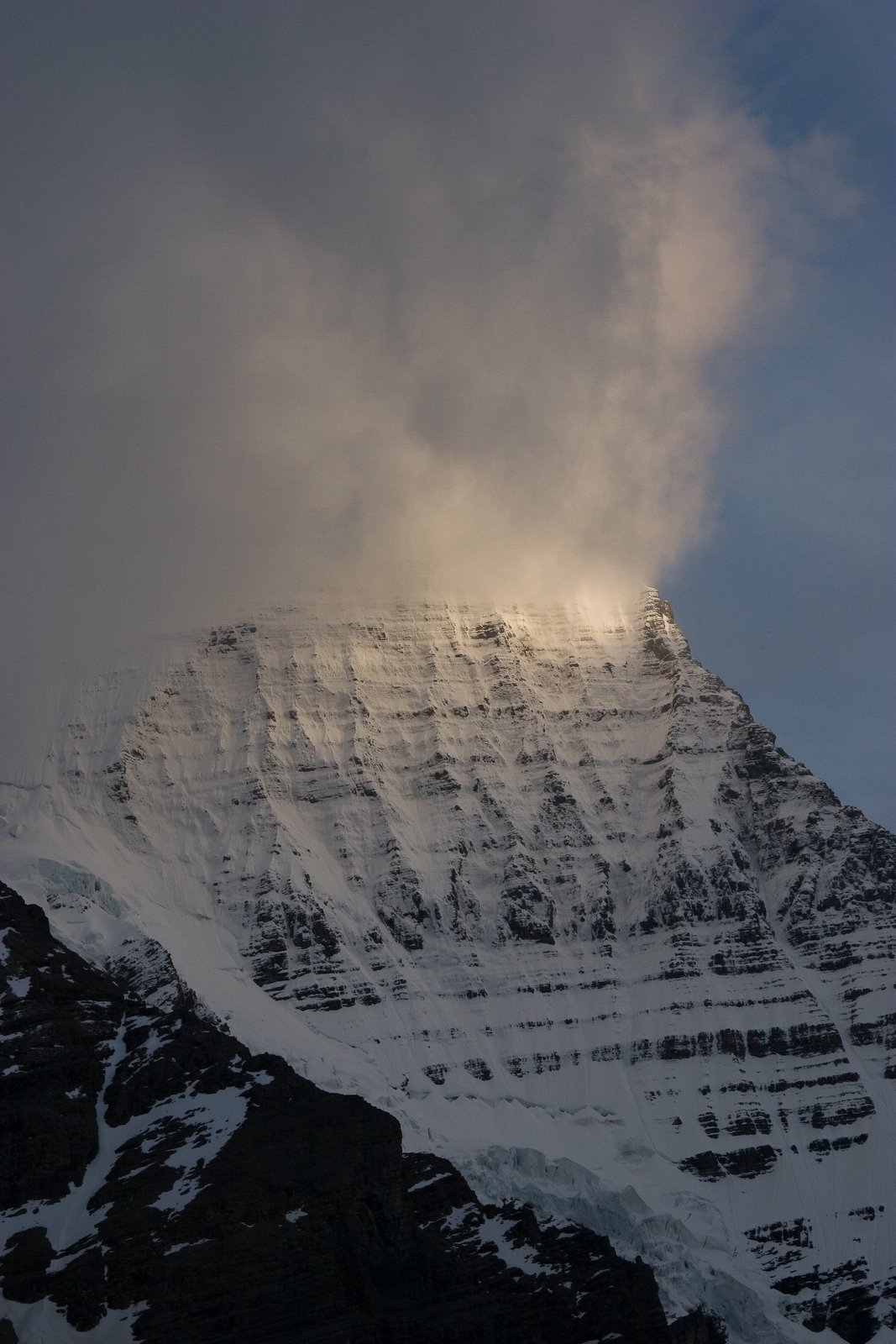 Osprey makes very good packs, and my current weekender is a climbing pack with very few bells and whistles. It carries enough for a three day trek if you pack light, but it leaves very little room for camera gear. And it only weighs a kilogram.

Look at the Kelty Tioga series for a great example of a classic external frame backpack. While I favor the internal frame style, this pack has stood the test of time, and is highly recommended by many people. If you are planning to carry heavy loads, this may be a better option for you. Try both and see.

One piece of gear that I’ve found incredibly helpful is the Cotton Carrier system. Basically a camera harness, it allows me to carry one or two cameras without the load hanging completely off the neck strap. Great for climbing, or any activity like backpacking where you need to have your hands free and the camera secured for part of the time, the Cotton Carrier holds the camera close to your body until you need it. This is a bulky piece of gear, but worth the extra load in certain situations. Backpacking with a full size DSLR and a heavy lens would be one of them. The Zing Action cases use the same idea — a strap that goes around your waist to keep the camera from swinging forward or from side to side as you walk. 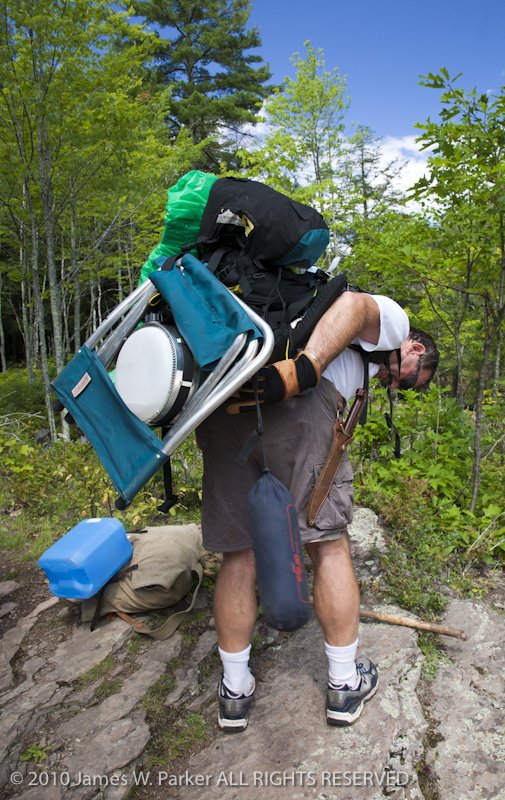 What NOT to do when backpacking! Byron Johnson attempts to load the back half of his 80 pounds.

Some tips for traveling light: