“Bacon in the Sun” — A different kind of landscape 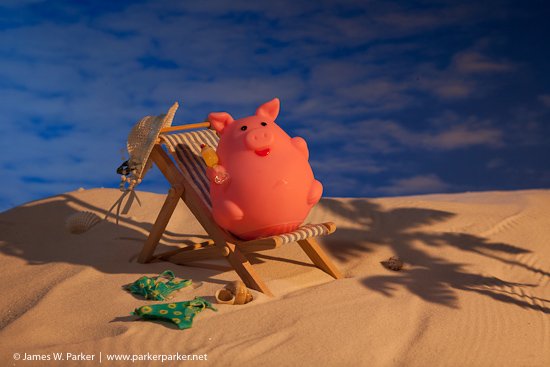 Completely created in the studio, this photograph was the brainchild of some raucous behavior back in 2009. Somehow, at one of our shows, our friend Wendy Baxter had commented on how hot it was and said she was bakin’ in the sun. That morphed into her nickname — Bacon, and that in turn spawned this concept. I found the little pig at a toy store after meeting up with them in Chicago for Wendy’s 40th birthday last December, and assembled the rest of the props piecemeal. Wanting to give them something memorable for their upcoming wedding this past weekend, I set up this shot in the studio.

Using just three Speedlites to light the scene, I used Peter Gregg’s better bounce card for the key light, and a second speedlight way up in the air to the right to simulate the sun. The second light was zoomed to the longest length and gelled with a full CTO to warm up the light. 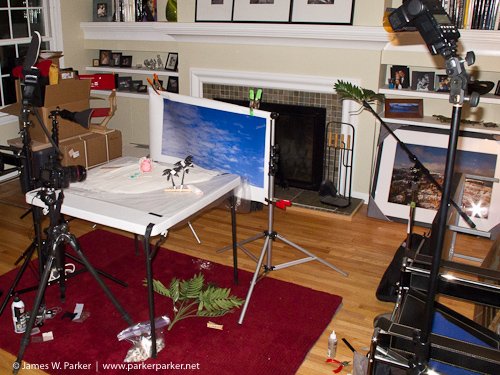 Bacon in the Sun – studio setup

I printed a sky background from an existing photograph and hung it from a background standard, lit with a third Speedlite gelled blue from the lower left side, below the set. Exposure was about f16 at 1/200 of a second, at ISO 200, using a Canon 5D and a 24-105 L-series lens.