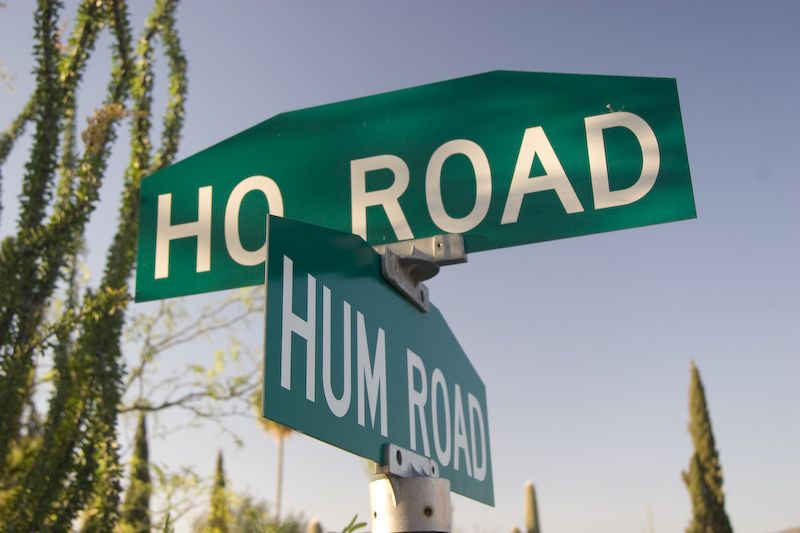 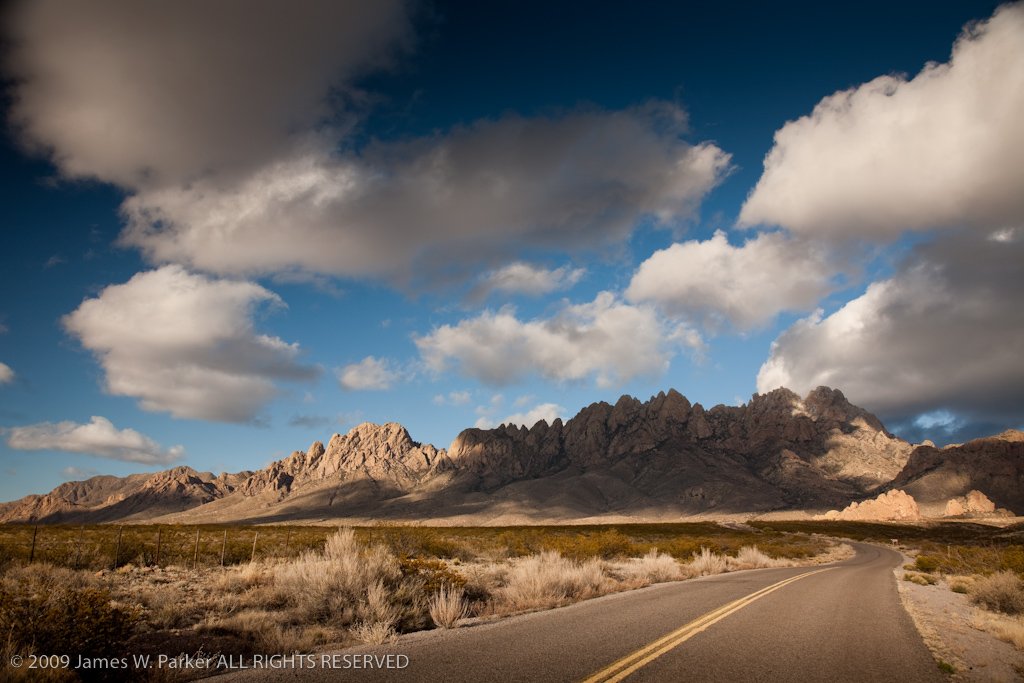 It’s been close to a week since I got back to Michigan after six weeks on the road. And I gotta say, it was great to see my baby at home again, even though she spent most weekends with me at the shows. One thing I learned during the 10,000 miles I drove from Michigan to Florida to Arizona back to Florida and home again: there’s a lot of interesting scenery on I-10. Was sorta sad that I had no time to stop and make photographs, but many mental notes were made. The Atchafalaya Basin, the Texas hill country west of San Antonio, the Davis Mountains, Steins, Texas Canyon in Arizona, the “Thing”… many places and many stories just waiting for the light.

The shows themselves were a mixed bag, sales-wise. Florida started out strong, with ArtFest Fort Myers and ArtiGras in Jupiter. (See my previous post on ArtFest.) We had spotty weather, though, with winds and rain at Fort Myers, and cold days in Jupiter. I spent a couple days after ArtiGras in Orlando at the Baldauf-Astoria, and then headed west on I-10 towards Las Cruces, where I stayed a few nights with my mother’s sister, Nema. 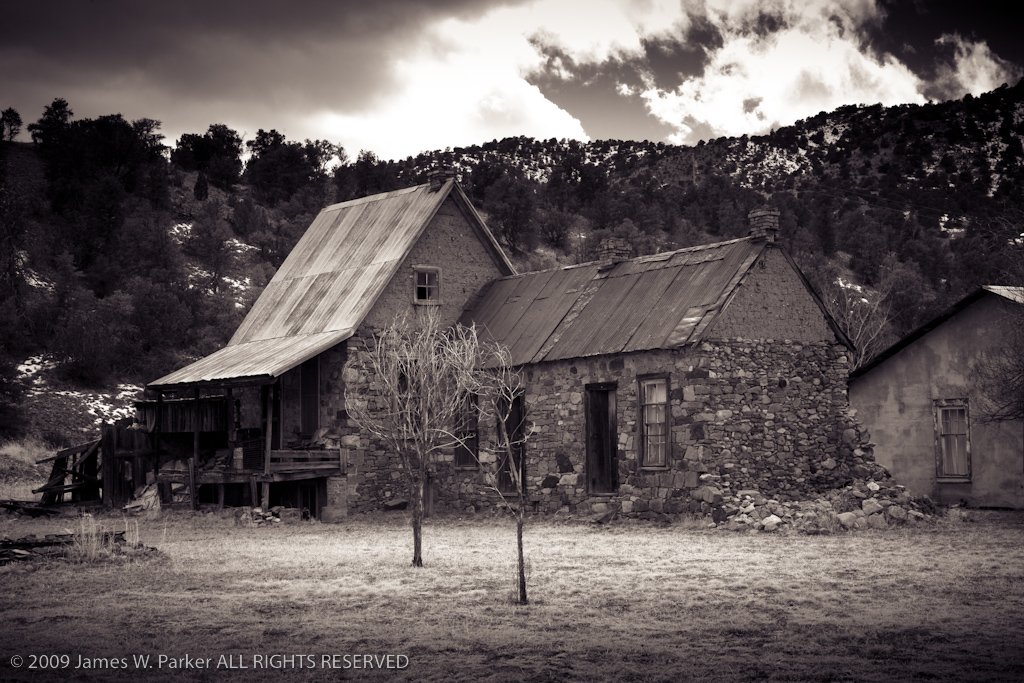 The two of us drove out to Chloride, a well-preserved silver mining town near Truth or Consequences. The owners, Don and Dona Edmund, have spent the last twenty years working on the town, and gradually restoring the cabins and the general store. It’s well worth the trip out there just to see the Pioneer Store Museum. We also had lunch at La Posta in Mesilla, and visited Bowlin’s bookstore. 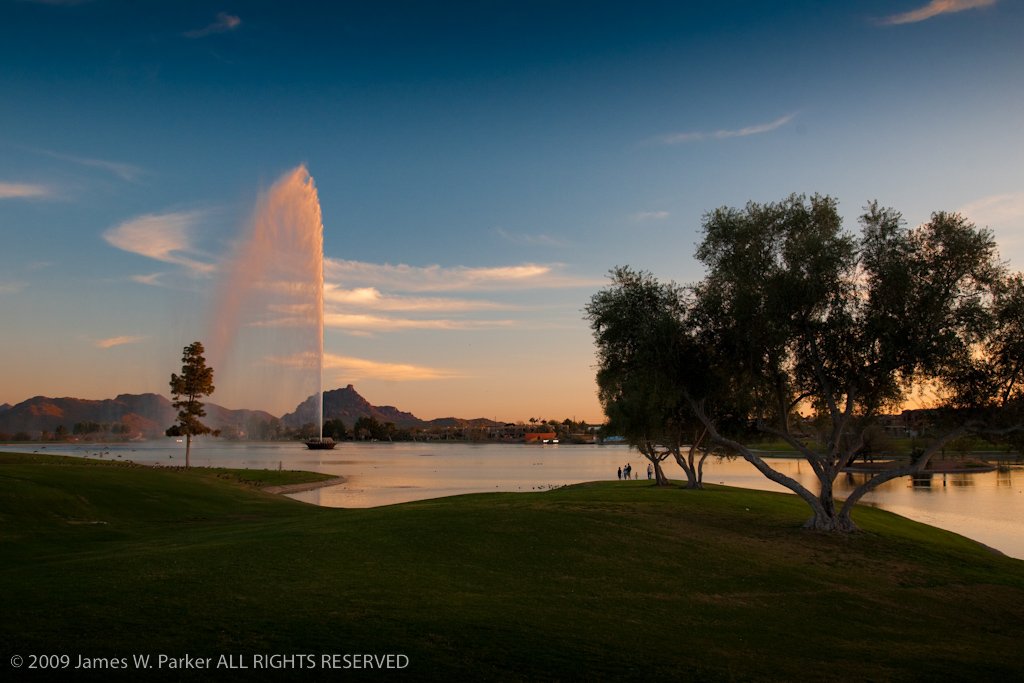 After leaving Las Cruces, I had an easy drive to Phoenix, where the Great Fair in Fountain Hills and the Carefree Fine Art and Wine Festival promised great sales and good weather. Alas, neither was forthcoming. The weather in Arizona, much like the weather in Florida this winter, was cold and rainy. Sales were very slow for good art at the Great Fair, and quality quite spotty. We were amazed that such mass-produced buy/sell crap could get into a show next to fine art. The jury selection process consists of writing a check — there’s no other explanation for the wide range of quality. With almost 480 artists, there are at least 180 too many vendors at the Great Fair. Two rows of booths on both sides of Avenue of the Fountains extend down to the beautiful fountain for which Fountain Hills is named, with additional booths along the drive. I was across from another good photographer, Timm Chapman, and that set the tone for the upper end of the show. Good stuff, bad stuff, good stuff, bad stuff. 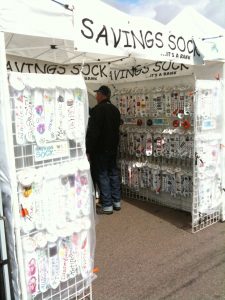 The infamous Savings Sock booth: don’t tell me this was juried in! 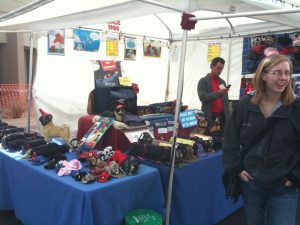 One good reason I’ll never go back to Fountain Hills

Interspersed between the doggie visors, scented candles and glass nail files were at least another dozen photographers, none of whom seemed to be doing very well. The weather continued its uncooperative behavior, with cold temps and rain on Sunday, which drove most of the crowd away. Many artists broke down in the morning, with the permission of the promoter, and by five the threat of another storm had the rest of us scrambling to get up and away.

In between shows, I spent some time exploring the Phoenix area. I managed to get up to Wickenburg and the Vulture Mine, which was a great experience. I also climbed Pass Mountain, on the recommendation of a friend. I previously wrote about that, in an earlier post.

Carefree promised a better crowd, and more importantly, a higher level of art at the show. Put together by the experienced Thunderbird Artist group, the show is set up around the amphitheater and sundial on the charming downtown streets of Carefree. Setup on Thursday night was semi-chaotic, and we ended up dollying across Cave Creek Road to our location on Ho Road. (Or was it Hum?) We were sad to discover that the street sign marking the location of Ho and Hum Roads had been removed by the local authorities, to make room for a streetlight. Friend and fellow photog Darren Olson was set up at this intersection, and had a pretty good show. Matt Suess and Christine Hauber were sharing a booth down the street, and I was pleased to finally meet Christine.

Other than that I never had a chance to walk the show. From what I did see, the art was predominantly western, large, and wonderful. Saturday night the threat of a bad storm (once again) caused many of the artists to break down and leave. Sunday morning dawned cold and gray, with light drizzle. The holes in the show were glaringly obvious, and while we all had permission to leave early, many decided to stay and wait for those hardy souls who might brave the weather in search of fine art. Alas, the weather was not going to cooperate. 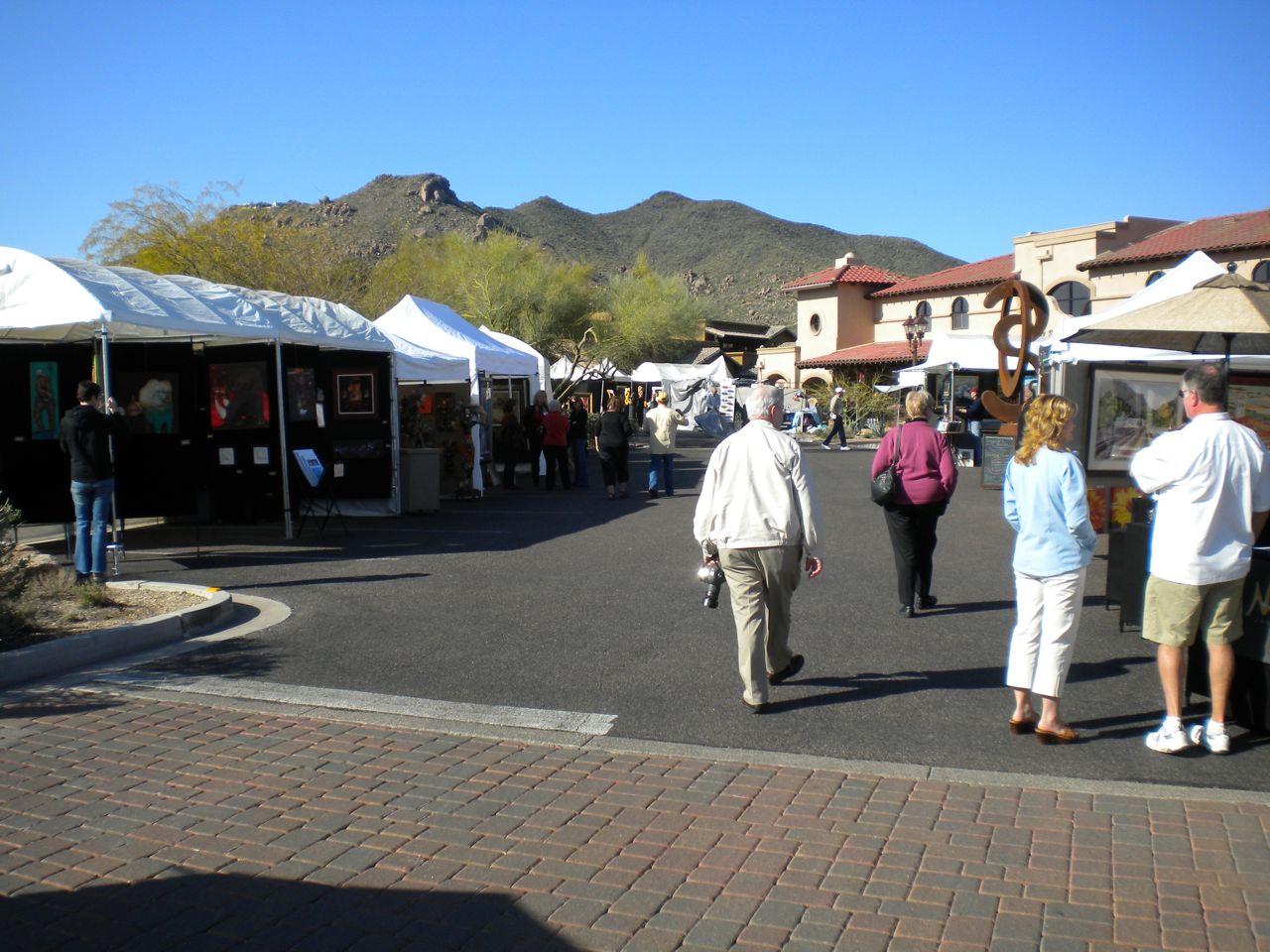 The featured artist, a glass artist, had left all of her work overnight, and merely had to turn it over to empty the evening’s storm water from her vessels! But the rains came in full force, promptly on time as the show opened at 10AM, and we all gave it up around noon. Most everyone was packed and gone by 3. We had a great lunch at Carefree Station — highly recommend. 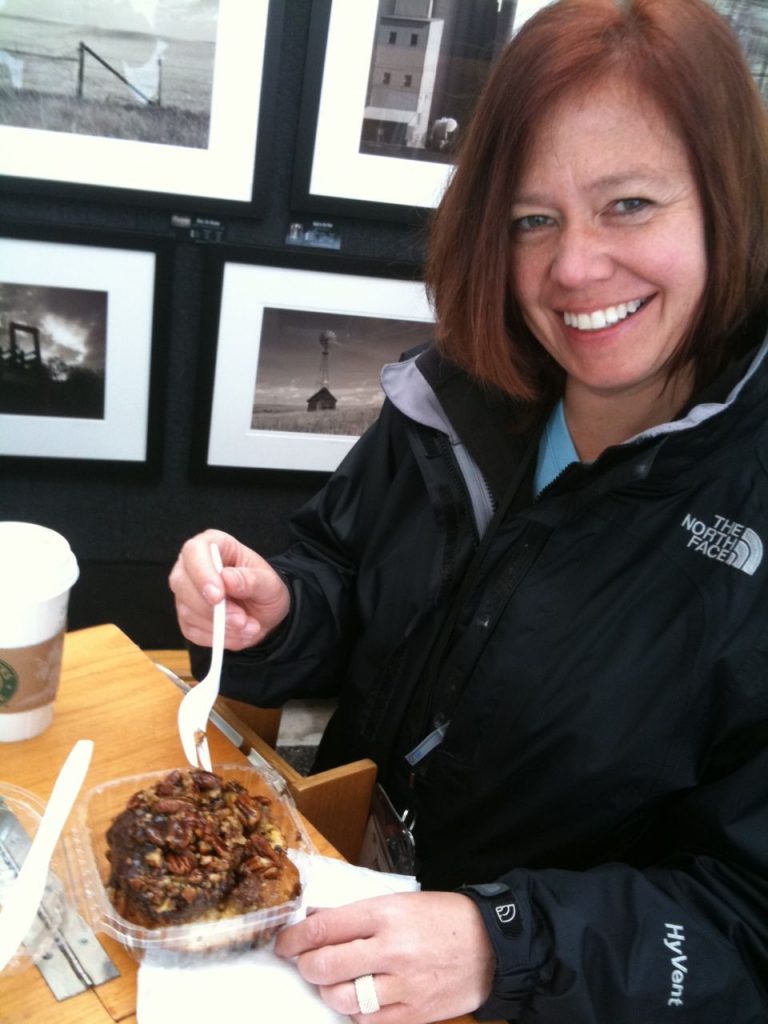 The BEST sticky buns in the world!

So, Monday morning found me back on the road to Florida. Another stop at Nema’s, where we drove up to the base of the Organ Mountains, and had a fine dinner at the famous Cattleman’s Steakhouse. I meet people at shows who are familiar with Las Cruces and Mesilla, and Cattleman’s is an institution. I have to say, it used to be better, but it still serves up a fine rib-eye in an authentic atmosphere.

Tuesday I was back on the road, with three days to get back to Bonita Springs, and, you guessed it, more rain. One out of three days on the road was gorgeous, with puffy clouds dotting the blue sky, and the horizon beckoning. The miles flew by like a knife through butter. Arriving Thursday night in Bonita Springs, it was rainy, with more of the same predicted for Friday’s setup. And sure enough, it poured most of Friday, so Karyn and I waited until later in the day to get our tent up. We were able to have dinner with our close friends Wendy & Marc Zoschke (Vetro Caldo Designs) and Anita & Steve Baldauf, where we presented Wendy with her very own “Savings Sock” from the Fountain Hills Great Fair. 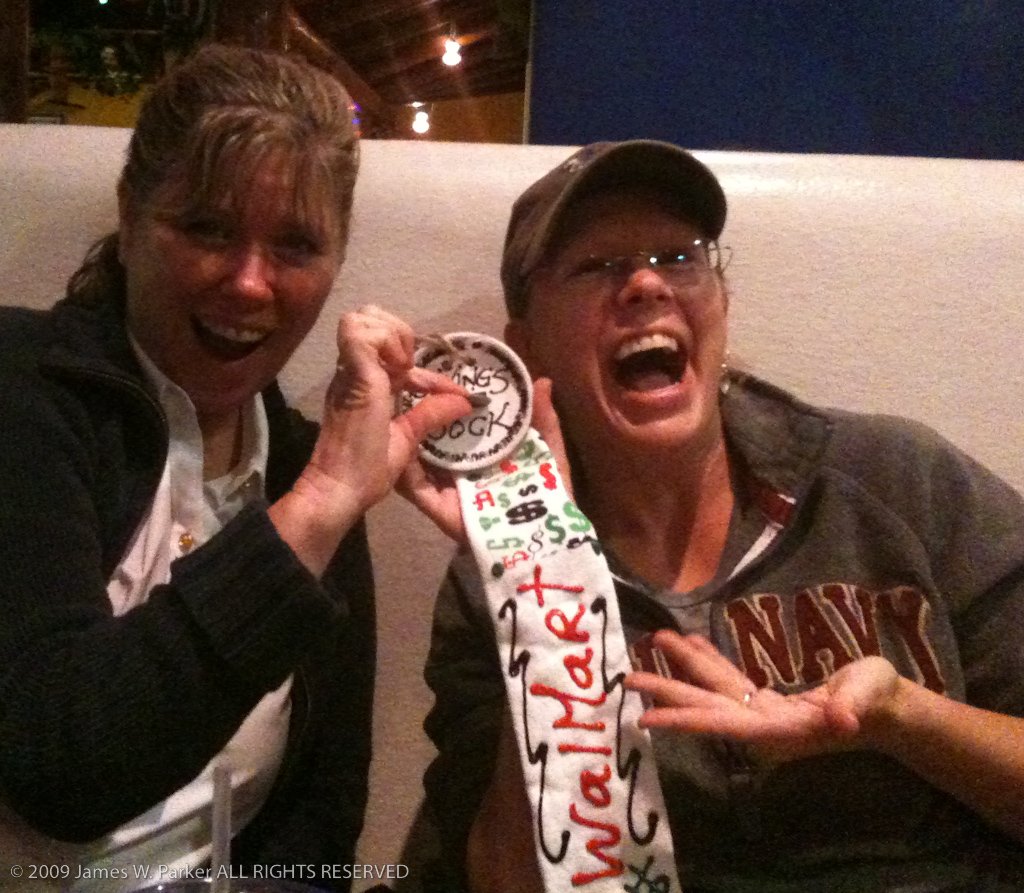 Anita and Wendy share a laugh over the Walmart Savings Sock 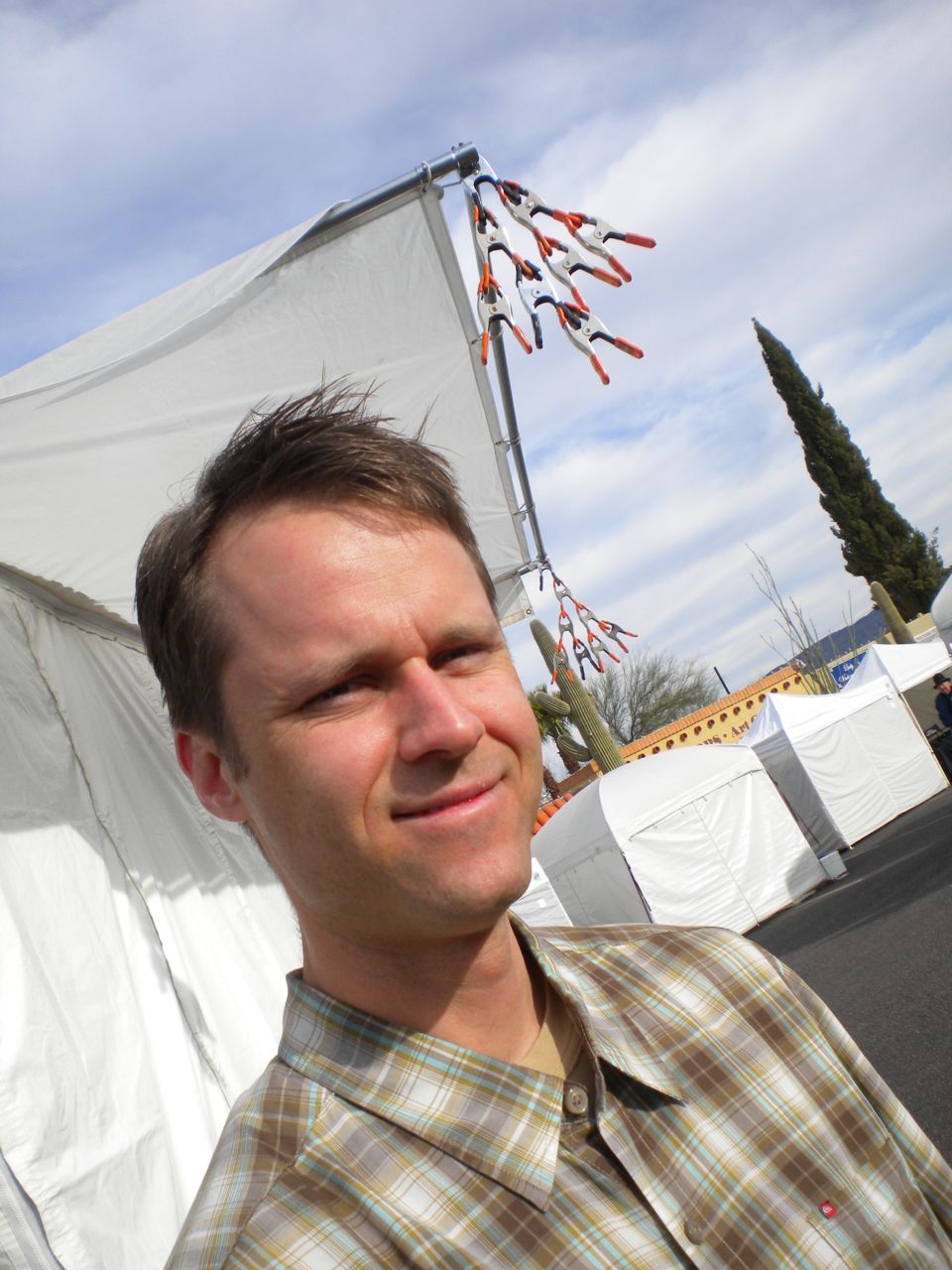 But the Bonita Springs National Art Fair was a disappointment. The weather was beautiful all weekend, in the low seventies. Perfect for an art show. But attendance was light. Most of the artists spent the weekend wandering around talking to each other. And that’s not a good sign. We ran into C.C. and Shiu Ping Lee, P.J. and Dick Commerford, RC and Kim Fulwiler, Michele LeVett, and Madison Latimer, the Crazy Chicken Lady. We had a party. But we didn’t sell a whole lot of photographs. I’m coming to the conclusion that South Florida has far too many art shows, and far too few patrons. Colorful sells, as does jewelry and wearables, but photography is tough.

Okay, so on to Winter Park, the crown jewel of my early spring schedule. I had high hopes for Winter Park. It’s a great show, in a lovely part of Orlando, with some of the best artists in the country. The last time I participated, I did well and we had a great time. So I was definitely looking forward to being in the show again this year. Winter Park was the main reason I rearranged my schedule and drove 5,000 miles back and forth between Florida and Arizona.

I headed up to Orlando on Monday afternoon, and played golf at Timecuan with Steve Baldauf on Tuesday. I carried my clubs for 8,000 miles without a single putt or drive anticipating a little more golf than I actually played. Again, with the chilly temps. It turned out to be a nice day, and we had a good time. Wednesday I caught up on paperwork, and then Thursday it was time to setup the show. Thankfully, it didn’t rain. No, it saved that for Sunday afternoon. But Friday and Saturday the weather was good, and we had great crowds. I won another award, an Award of Distinction. The artists dinner on Saturday night was awesome, and then we headed out to another party. 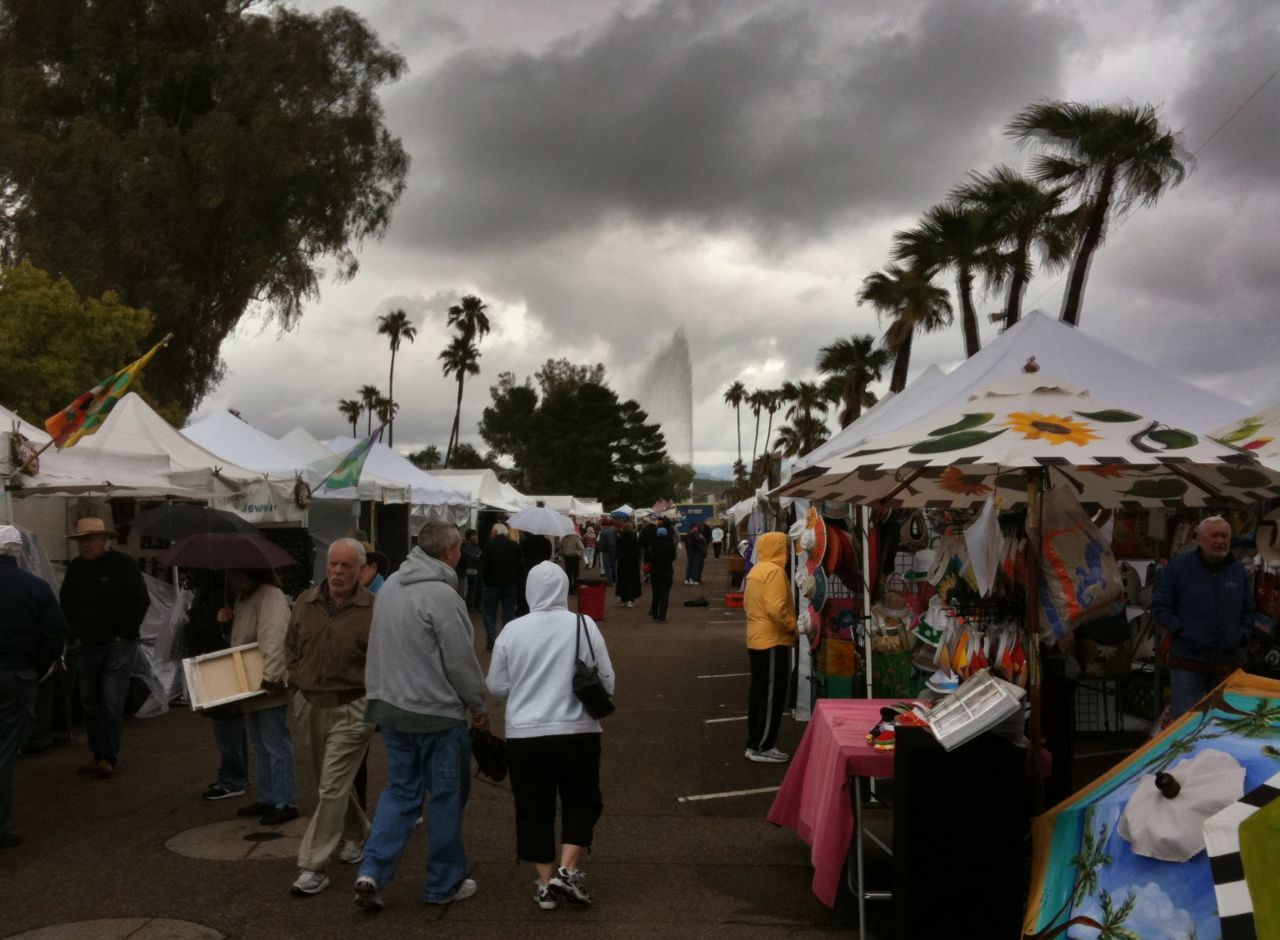 Sales on Friday and Saturday, again, were slower than expected. Sunday, usually a day where all the buyers come back and go crazy, started out well, but by noon, the rain had started up again, and the weather radar was not looking promising. Still I had some good reactions to the new black and white work, and prints were flying out of the bin. Once the torrential downpour started, however, it was all over. We packed up the art, rolled down the walls, and went off to see some of the other artists while waiting for the park to clear out so we could get the Artanic in to load up. Then we went to Starbucks and had a cuppa joe. An hour later, some of the madness and the flood waters had subsided, and we were able to move the trailer onto the street and get packed up. Winter Park, on the whole, is a well-run show, with very very high quality artists and work from around the country. From the guys directing traffic in the close-by artists parking areas, to the load-in and load-out process, to the awards judging, this is a high-class act. If invited, I would definitely go back.

We saw lots of friends at Winter Park, of course. Glen and Linda Mace were there. Wendy and Marc were there. PC James was there from Chelsea Michigan, and we had dinner with him and the Zoschkes at Denny’s after breakdown on Sunday. Antoni Kozslowki was there. Lots of friends. Lots of good times. 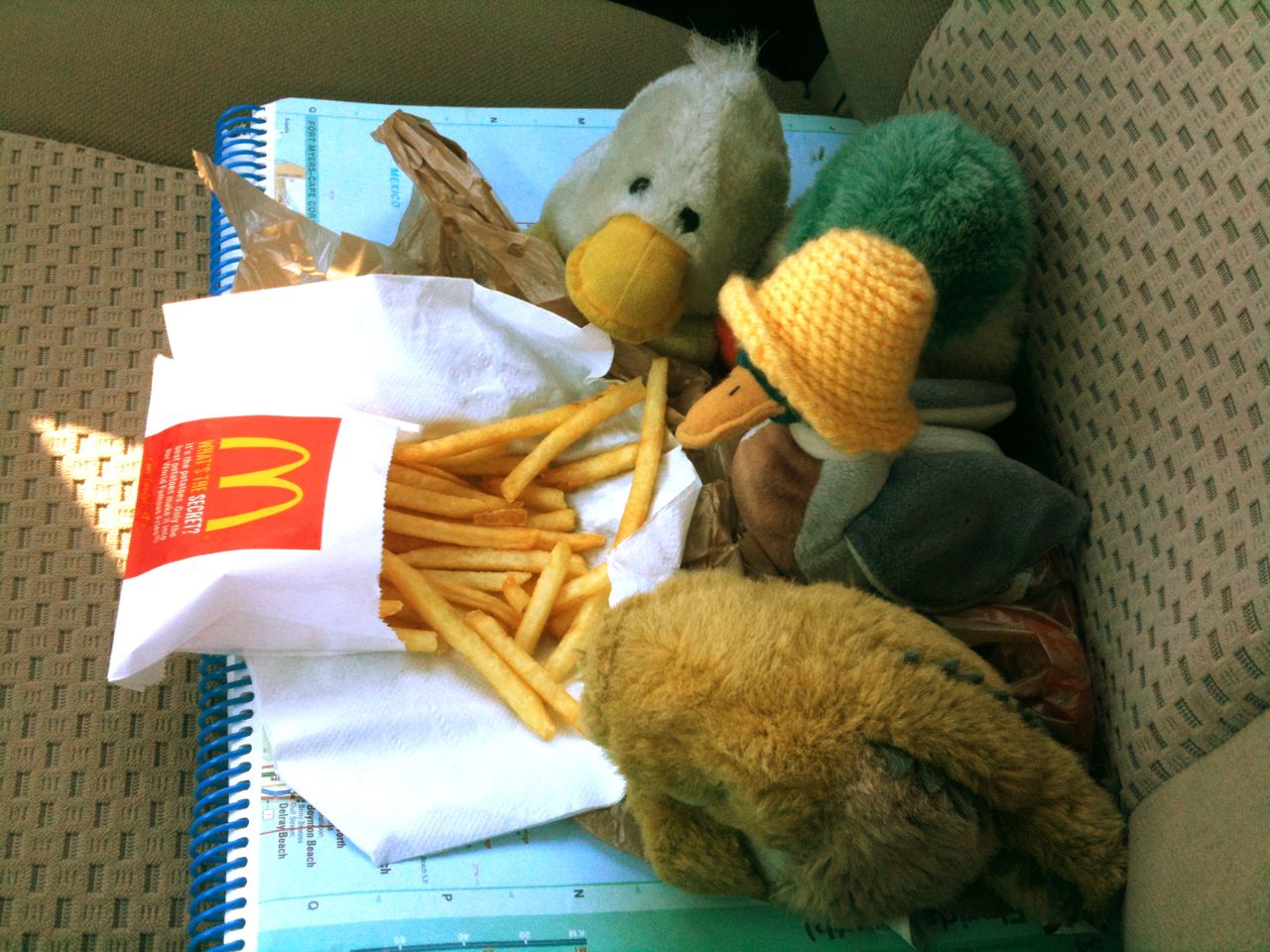 Monday I dropped Karyn at the airport, and hit the Florida Turnpike. 1250 miles later I was finally home. The drive back was uneventful. I think it was warmer in Michigan than the average temp in Florida this year. Would I drive this many miles next year? Probably not. With the economy the way that it is, and the logistics, I may stay closer to home next winter. But I say that every year. Wait and see what the schedule turns up. In the meantime, I’m gearing up for a solo exhibition, two shows in April, and a full summer of traveling.

← Previous Link: Souvenirs of the Southwest Next Link: 10 Requirements for a Successful Art Show Item →