A Tale of Two Peaks 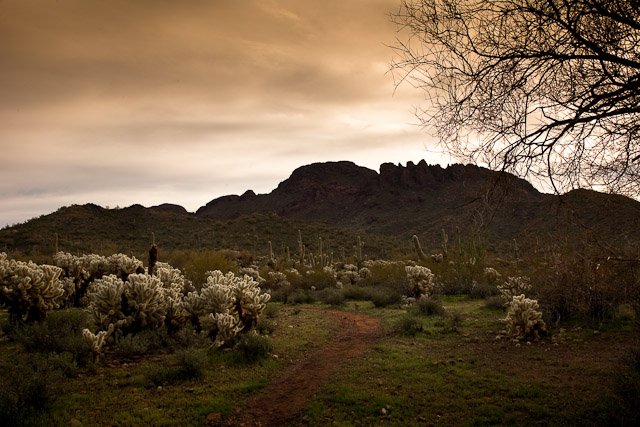 While in Arizona for a couple of shows, I had a few days to nose around in the mountains. Monday was cloudy in the morning, and I spent most of the day just driving. First it was to Sky Harbor to drop Karyn off for her flight back to Detroit. Then I got turned around on the exit ramps and headed east on the 202, so I just drove northeast towards Payson. I grabbed a shot of a windmill I’d spotted the previous week, but photographically, the day was pretty much a bust. Coming back through Globe and Superior, I did see a peak that was picturesque and climbable. Picketpost Mountain is right off Highway 60, and there is a trail that goes to the top. I added that to the “someday list”, along with Picacho Peak, between Tucson and Phoenix. 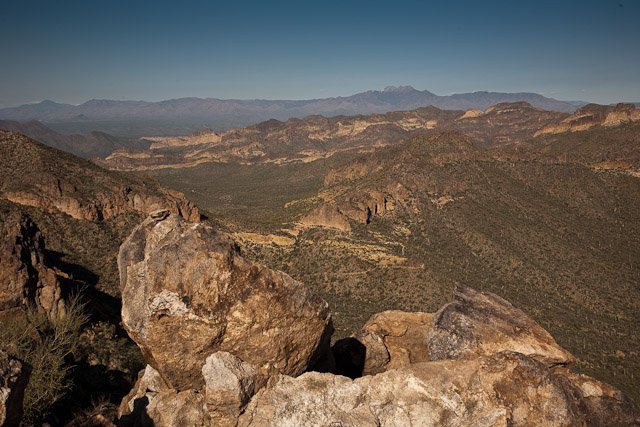 Tuesday I headed out towards Wickenburg. I got up early (4:15) in hopes of catching the sunrise, but it was not meant to be. The day dawned cloudy with barely a milky sun. The moon was just setting in the west as I pulled into Wickenburg and gassed up. On a whim, I headed out to the Vulture Mine, which I’d heard of via Art Skopec, a local Phoenix photographer and friend. But it was too early to tour the mine (they open at 9 in the winter months). So I killed some time by walking up Vulture Peak. There is a rough campground at the base of Vulture Peak, with a mess of RV’s seemingly parked permanently there. I was put off at first, as it looks like a prime ATV spot, with many tracks running down washes. I parked Blutan the Truck and loaded up my bag with camera, food and water, and set off across the desert. The trail is well worn, and there was a maintenance crew camped at the trailhead. No problems finding or following the trail. It starts out as a pleasant ramble through saguaro, barrel cactus, ocotillo, teddy bear cholla and the usual Sonoran suspects. The grade is easy, and I took a few shots as I walked. 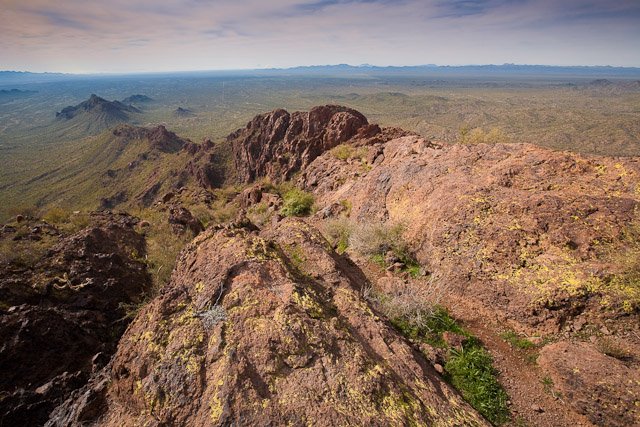 The top of Vulture Peak

After about a quarter mile, the trail crosses a big wash which is 4WD accessible. There is a trailhead closer to the peak that you can drive to, but that seems to miss the whole point of the desert experience. The 4WD road follows this wash for a bit and eventually meets up with the trail at the base of the peak roughly a mile in. The last half mile is pretty much uphill all the way, switchbacking gently up the slope to a saddle, where the maintained trail ends. I met the maintenance crew up on the side of the hill, busily cracking stones and clearing drainage ditches. The trail showed obvious improvements where they had been. Spent a few minutes exchanging pleasantries with them before struggling up the last few feet to the saddle. It was windy up there, and I was glad I had a jacket to stop the breeze. To get to the peak proper, an obvious use trail heads up a gully to the left. Some scrambling is in order, but it’s pretty easy stuff, with no exposure. After a couple hundred feet of mucking about, I was on top, with 360 degree views. Some jerk had spray-painted her name on a boulder at the top, and I spotted two USGS survey markers. Also a used condom. Come on people, clean up after yourselves! I made a few photographs and added my name to the battered summit register, in an old ammo box set in a concrete anchor. 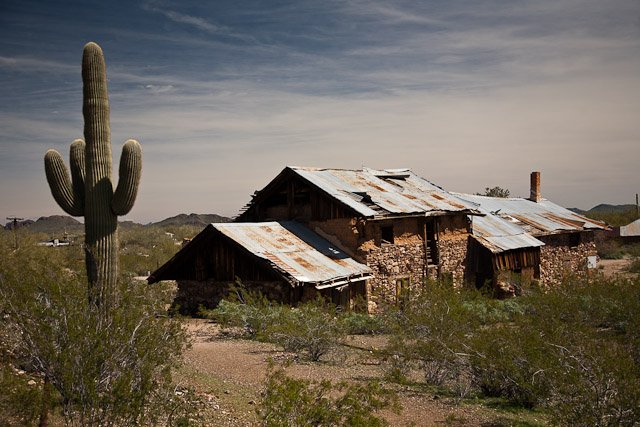 The assay office, constructed of stone from the Vulture Mine

After reaching the bottom, I wandered over to the Vulture Mine. That will get its own post, as it is a wonderfully preserved (not restored) and cared for gold mine. Marty and Roma Hagen run a small souvenir shop and let tourists wander the workings and ruins on their own. I really enjoyed the mine, and recommend it highly if you are in the Wickenburg/Phoenix area. They are closed in the summer months though, due to the high desert heat. Phone ahead.

Yesterday, I went over to Mesa to Usery Mountain Regional Park, to hike the Wind Cave Trail. My doctor, Mark Florek, had mentioned that this hike had been a favorite of his father’s in years past, so I had wanted to check it out. The Usery Mountains are right next door to the Superstition Mountains, just northeast of Mesa. Access is easy, and the park is open most days for nature walks and camping. It’s $6/day per vehicle to get in. 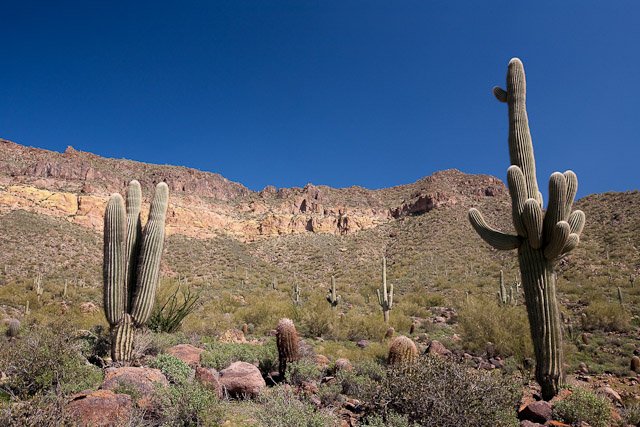 The Wind Cave trail is very popular, being close to a major population center, so don’t expect solitude. I met a lot of people walking, trail running and many of them were older, fat , out of shape, or all three. I felt right at home. Lots of dogs, too. The trail ascends gently through typical Sonoran desert scenery. Lovely views towards Phoenix, with saguaro, ocotillo, cholla, prickly pear, palo verde and beautiful barrel cactus. The approaches to these quick peak bags are often the best part of the hike, and the easiest, especially later in the afternoon, when the light gets low.

The trail gradually gets steeper, and switchbacks steadily up to the headwall of Pass Mountain, where it traverses the base of the rocks. After about 1.5 miles, you reach Wind Cave, a large undercut recess in the limestone. It’s not really a cave, but it is cool and shady. And yes, windy, too. The breeze felt good in the afternoon heat. This hike faces west, so I imagine it’s a great spot to come for the sunset. Plan about an hour to get to the cave. The trails do close at sunset, so you would want a headlamp to come down after dark. (I don’t think they’ll kick you out if you’re already on the trails.) Watch your step!

At the cave, a sign warns that hiking beyond the trail is dangerous. Indeed, the footing is loose, and there are dropoffs. I walked across the cave to the north and ascended an obvious gully, where three tall saguaros seemed to mark a path. There is no trail here, so experience and prudence should dictate your own passage, should you choose to pass this way. After ten or fifteen minutes of scrambling, I reached the ridgeline. Traversing the ridge towards the summit, I found a well-worn use trail, complete with white blazes. It sort of took the fun out of my bushwhack, but it was going where I was going, so what the hey. 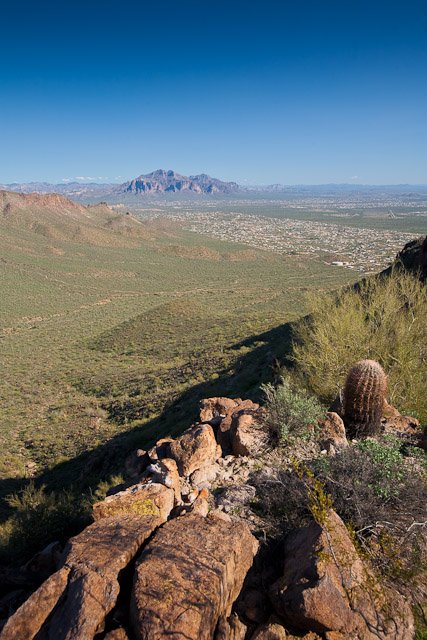 The Superstion Mts, from Pass Mountain

I followed it to the top, and was rewarded with fine views of the Superstition Mountains to the East; Four Peaks to the North, and Phoenix, Mesa and Apache Junctions spread out on the other side. Well worth the extra effort to get to the top. And I was the only one up there. Most tourists stop at the cave, warned off by the threatening sign. I stayed on top long enough to take a few pictures, then followed the use trail back to the cave. At one spot, the trail forked, and seemed to head off in the wrong direction, so I headed right. A small headwall required down-climbing, but mostly it was easy going to reach the bottom of the headwall. Rounding a corner, I was once again back at the “Danger, Will Robinson!” sign. Hmmm…. didn’t seem all that dangerous to me. Again, your mileage may vary.

When hiking in the desert, always take a map, water, some emergency eats, a compass, a flashlight, clothing for extra warmth should you get caught out at night. Let someone know where you are and when you expect to be back. I found that texting my wife with my whereabouts works extremely well, in areas with cell coverage. Since I don’t always know where I’m going to end up when I leave my accomodations, this works better than leaving a note. I don’t advise leaving a note on your windshield when you park your car, as it can alert thieves to the length of time you plan to be away from the vehicle. And remember: when your water is half-gone, your hike is half-done. Turn around and head down! I learned this the hard way, on the Flat Iron. But that’s another story.

Both of these hikes are described with great accuracy on Todd Martin’s wonderful hiking page. His beta was very useful to have, and as a consequence, I had a trouble-free, very enjoyable experience. His web site has a plethora (don’t you just love that word?) of information on southwest and desert hiking. One of the best I’ve found.

Today, I’m too tired to get up and go hiking, so I’m writing about it instead. This afternoon, I’ll be setting up for the Carefree Fine Art and Wine Festival, and I’m hoping the weather holds up as nicely as it has this week. Till next time: Happy Trails! 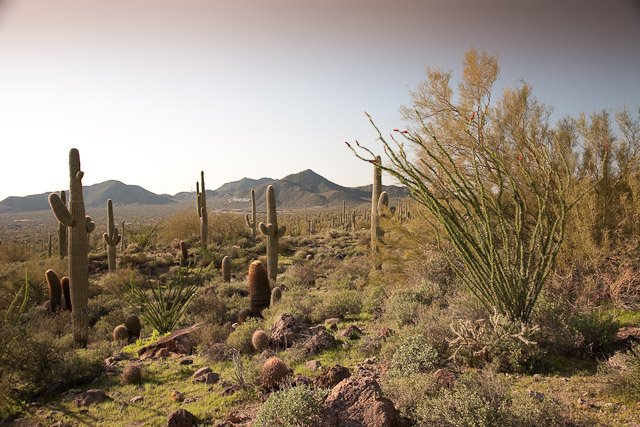 ← Previous Link: One of the finest collections of Southwestern books in the West Next Link: Souvenirs of the Southwest →