Some thoughts from ArtFest Fort Myers 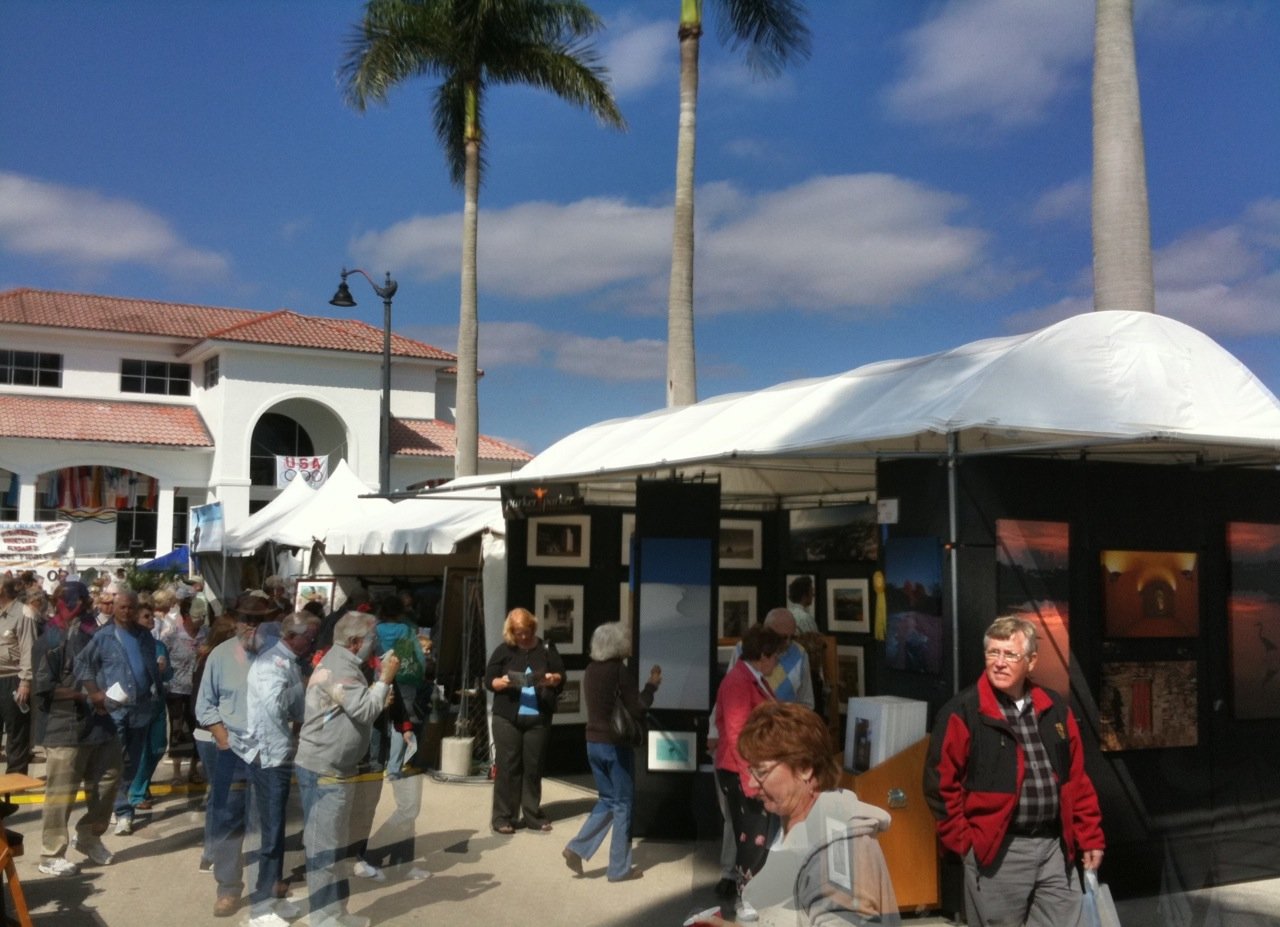 It’s the middle of February, and amidst one of the coldest, snowiest seasons on record, Karyn and I have officially started the 2010 show season. Last weekend, we participated in a windy setup at Fort Myers. We got to the show site at noon, and found a spot to park the Artanic. It was a short dolly into our space, and we were able to leave the trailer in the lot all weekend. But the setup was difficult, with winds gusting up to 40mph, and we had a tough time remembering how to get the double into the air. Luckily, our friends Wendy and Marc stopped by to help keep the giant kite on the ground, and after struggling for a couple of hours, we had the walls and the panels up. Moving all of the rolling stock into the tent, we left hanging the work until Saturday morning. At about 4PM, the heavens opened up and it rained cats, dogs and frogs for a couple of hours.

The show itself was well judged, with some new faces and some old friends. The space we had at the end of Hendry Street was a cul de sac, but the booths were back to back, so we had customers’ eyeballs to ourselves. We were off the beaten track, and being closer to the Caloosahatchee River, we got the brunt of the wind most of the weekend. Sales were slow on Saturday, partly due to the unseasonable cold weather. Sunday was better, and I had some good sales of my newer black and white work. In the end, I was happy with the show. The crowd seemed more laid back than the Atlantic Coast patrons, and even more relaxed than the Naples folks. I was surprised to meet several people from the Dakotas and Michigan, although the Gulf Coast does appeal to the Midwestern snowbirds.

The show is well-organized, and not over-orchestrated. The director, Sharon McAllister, and her capable staff, including block captain Carrie, are visible during the show and at the lovely artists’ breakfast, which is served both days. Awards are presented after breakfast on Sunday morning, although this year, the prize money was eliminated. Ribbons are fine — let that additional cash go into promotion and advertising. And it appeared to work. There were lots of people, eager to visit and talk about the art. I think it’s a good thing when award money is diverted to create more awareness. And Fort Myers certainly appears to love this show, although many of the people we spoke with were snowbirds or transient visitors down for a week or two. 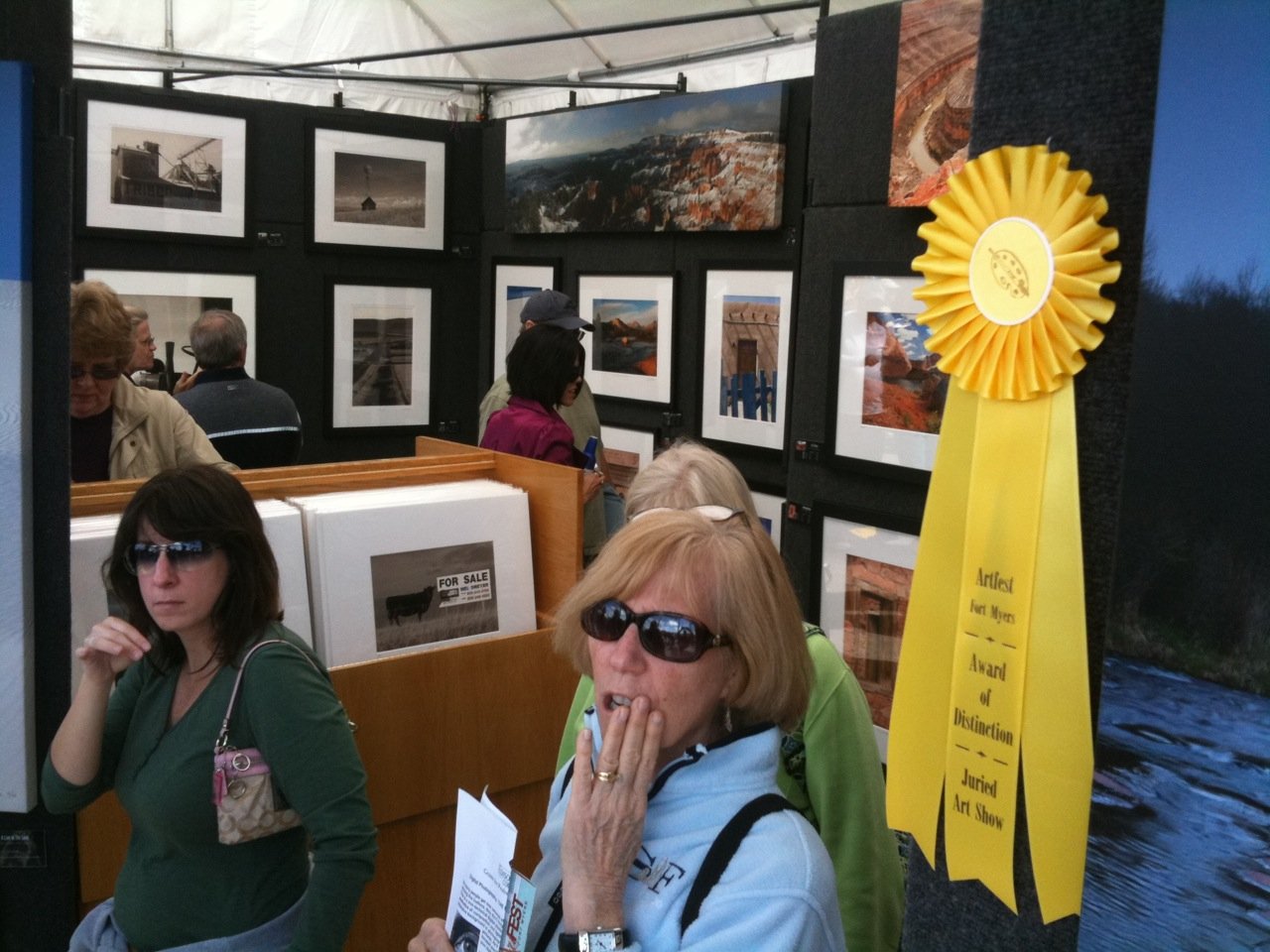 The icing on the cake for me came Sunday morning when two volunteers came by with an award ribbon. Evidently the judges liked my work very much was the message relayed. One more yellow ribbon for the wall at home. Thank you, Fort Myers!

This weekend, I’m on the opposite side of the state, in Jupiter. ArtiGras starts tomorrow, and I just found out that I’m in, off the waitlist. Early morning setup, with just 3 hours to get in, get unloaded, get set-up and hang the work. It oughta be a good time. Let ya know how that goes next week!

Till then, Happy Trails!

← Previous Link: Four reasons why art shows may be a good fit for your work Next Link: One of the finest collections of Southwestern books in the West →