It’s good to be the King! 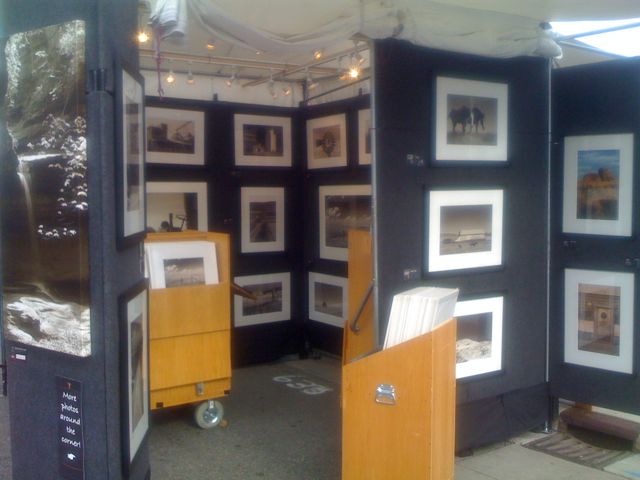 As many of you may have heard already, I was the honored recipient of the Best of Show / 2D Award at the recent Ann Arbor State Street art festival. Competing with painters, printmakers, and some other fine photographers, I was surprised to learn that I had won early on Thursday morning. Kathy Krick, the show’s director, stopped by with her entourage to present me with a nicely framed award, a director’s chair and a healthy honorarium. And to top it off, I was also featured on the noon news, in a brief interview with Val Clark of local Channel 7, the ABC affiliate. Needless to say, I was thrilled.

The work I hung for the State Street show was a bit different than my colorful Southwestern imagery. I decided at the last minute to show my “Disappearing Agrarian Landscape” photographs, which are all sepia-toned. Interest in the work was high. I spoke with all three judges, who spent time discussing technique and subject with me: a refreshing change from the drive-by judging so prevalent at most shows. Likewise, many patrons enjoyed the images, and a few of the pieces traveled to new homes. I did hedge my bets, though, by including my color work in the bins.

For me, one of the fun parts of winning this award was the director’s chair. I offered to take a photograph of anyone who was willing to pose in the chair, and captured a few patrons and artists alike. Since it’s Ann Arbor, we get to see a lot of our show friends, including Steve and Anita Baldauf (our very first art show friends!); Marc Zoschke and Wendy Baxter, of Vetro Caldo, showing their beautiful dichroic glass jewelry; Antoni Koslowski, who sent over some friends to model his amber jewelry; Steve Potts, woodturner; Steve Daniel and Jasper, showing his new tree frog series (way cool); and Jeff Lewis, of Lewis Creek Instruments; Angie and Doug Dresie; and Suzanne “Q” Evon, two other terrific jewelers. Karyn was in heaven, but conflicted about which artist’s jewelry to wear on which day. Many compliments later, I discovered that it was good to be the king.

The show was blessed by decent weather this year. Normally, there’s at least one microburst followed by hot, humid weather, followed by rain, followed by high winds. This year there was none of that. It was mostly mild, and nobody lost an EZ-UP. Will wonders never cease? Crowds seemed somewhat lethargic, however, at least at my end of the show at William and Thompson. Granted, my spot is a bit out of the way, but it’s quiet, and frankly, it’s easy to get to. Sales for me were about the same as they always are, and many previous customers stopped by during the four day event. It was fun, and exhausting.

For more pictures of the folks enjoying “king for a day”, read on…

← Previous Link: Crosby Gardens Festival of Art - Review Next Link: It's good to be the King (part 2) →