The evolution of the Artanic 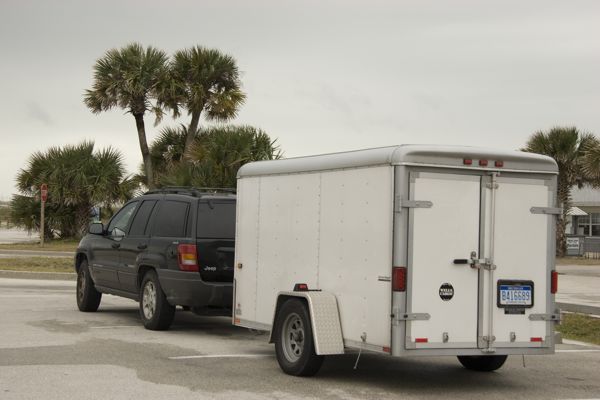 When I first started doing art fairs, I rented a van from Enterprise. We didn’t have a lot of equipment or art, so this worked out fairly well and helped to postpone what was to become a major investment. We used the rental van a couple of times, and discovered quickly that it was expensive. So I decided to buy a trailer.

The first trailer I owned was a 6×10′ Wells Cargo, with a single axle and no braking system. It had a maximum carrying capacity of about 2500 pounds, including the unloaded trailer, which weighed about 800 pounds. We had it packed pretty full in no time. I built some racks to stack wide Propanels above the canopy poles, and another rack to stack the 30″ panels and still leave room for plastic tubs of matted work. When packed exactly right, the trailer was full top to bottom, back to front. It handled a 10×10′ Trimline canopy, 10 30″ Propanels, plus two rolling boxes that carried 20×26″ framed work, two bins that sat on top of the rolling boxes, another box that opened into a bintop box, two larger boxes that carried 30×40 framed work, and other miscellaneous grimble. It was a lot of stuff! I towed it with my old Jeep Grand Cherokee, which had over 150,000 miles on it by the time I traded it in.

We christened this trailer Artie. It was a Wells Cargo R/T trailer model, and also carried “Art”. I’m big on nicknames and anthropomorphizing just about everything here in the parkerparker household. Artie served us well for two years, until I decided that I wanted to start showing more and larger work, with a larger 10×20′ canopy. The new Trimline was taller, too, by 2 feet, so I was finally able to use the extensions for the Propanels, giving me a wall height of 9′, and an overall height of 12′. This new tent generates a lot of comments from artists and patrons alike, mostly favorable, and mostly geared towards its similarity to the Taj Mahal. We’re thinking of adding a VIP loft with cappucino and biscotti sometime later this year! 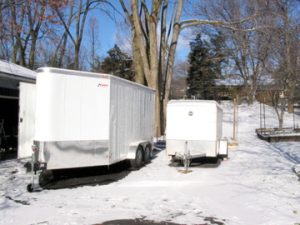 Comparison between the new and old trailers

Anyway, Artie just couldn’t handle the additional artwork and weight of the new tent, so I ordered a new trailer. Same source, American Trailer Mart. American mostly sells Harleys and Big Dog motorcycles, but they do carry an extensive line of trailers that are good for carrying big bikes. Also good for carrying art. I got my new trailer in January, 2007, and made plans to build out the interior to be more efficient. The new box has enough headroom that I wouldn’t be banging my head on the door frame (a pet peeve that generated lots of four letter words), has a big ramp off the back and a side door to allow access from the street when parked. It’s a large beast, too. I wanted a V-front to lessen wind resistance because of the added height (78″ plus the roof vent), and that adds about 5′ to the overall length. I went with the Pace American Conquest, partly because of reputation, and partly because it was less expensive than the comparable Wells Cargo (the Cadillac of trailers). 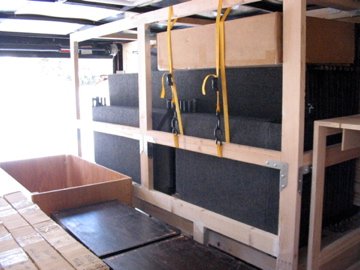 Panel rack, and center aisle, looking towards the ramp

Got that squared away, and spent a few days building a rack for the Propanels and a cart for all of the tent poles. The cart slid under the panel rack, leaving most of the right side of the trailer free for other boxes. I also built another rolling box, which ultimately was scrapped. The two big magillas came later. 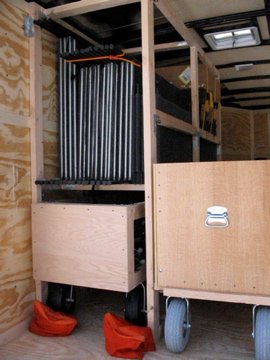 I got the trailer built out and loaded, and just about ready to haul to Florida for the first of six shows in a row. I backed the Jeep up to the trailer tongue and lowered the trailer onto the hitch ball. It weighed so much that it practically bottomed the Jeep out. It also made it impossible to unhitch the trailer again, because there wasn’t enough clearance to get the jack foot off of or back onto the trailer jack. This was a problem. The trailer brakes also didn’t work properly — there was something wrong with the electrical connector on the Jeep. I had to get a bottle jack and jack the tongue up again to free the trailer, and realized that driving 1200 miles and back with this rig would be, shall we say, unsafe. Planning is everything, and one thing’s for certain: life is what happens when you’re making other plans.

Called my buds at American Trailer Mart, and got a reco for a competent trailer place close by. Took the new trailer over to Howland’s Trailer Service, along with the Jeep and had a weight distribution hitch installed. They had to weld two supports onto the trailer tongue, as there wasn’t enough room to bolt them, due to the long v-nose. The Jeep took a heavy L-shaped bracket and two long spring bars that helped balance the load. They also fixed the electrical problem, by connecting the 7-pin to the pre-existing wiring inside the Jeep. These mods made a huge difference, and allowed the Jeep to haul the 7,000 pound trailer much more efficiently.

I drove this rig for a couple of years. It wasn’t fast, but it got me there. Slaved brakes on the trailer and the weight distribution system helped keep it on the road, and I averaged about 10 MPG on a good day. After four trips to Florida and two trips out to Arizona and Texas, I finally traded the Jeep in for a heavy-duty Toyota Tundra, which tows the trailer like butter.

The titanic art trailer (the Artanic) is affectionately known as Artan for short.


Archive | Life on the Road | Stories