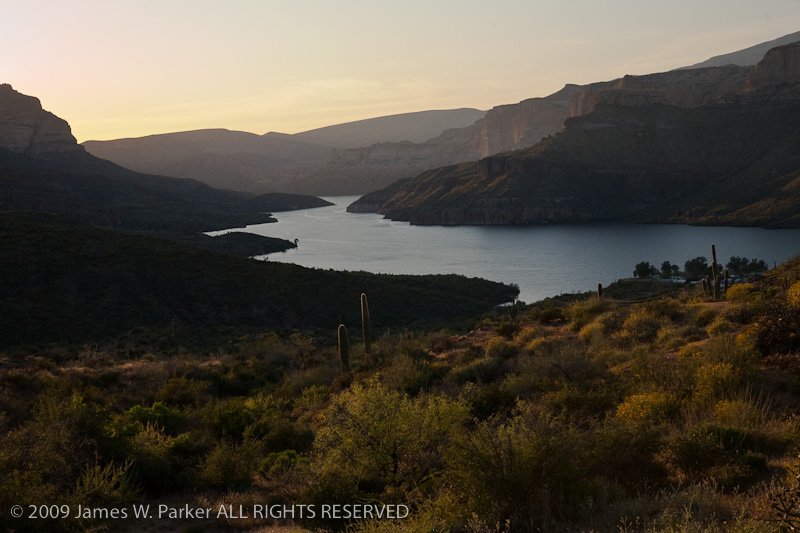 While in between shows in Phoenix, I wandered out to the Superstition Mountains near Apache Junction. The Superstitions got their name from legends passed down by miners and Indians as the area was explored for silver and gold. The Lost Dutchman Mine is reputed to have a fortune in gold still. It’s a fascinating wilderness area, and there are only a couple of roads that pass in or near the mountains. Highway 188 runs up from Globe to the Roosevelt Dam, and then on up towards Payson. But Highway 88 looks like a shortcut that runs southwest back towards Apache Junction and the Lost Dutchman State Park, where I did a bit of hiking up the Flatiron last year. And what a spectacular road it is! 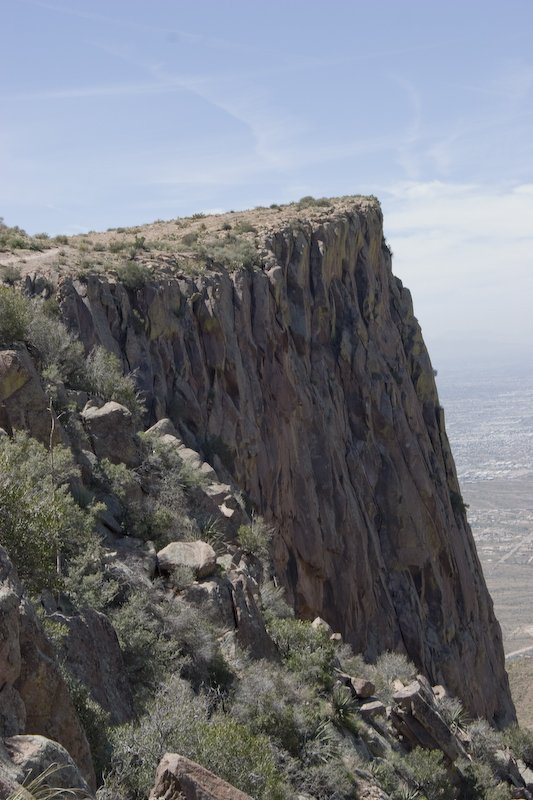 The Flatiron, in the Superstition Mountains

Together with friends Marc and Wendy Zoschke of Vetro Caldo Designs, we took a road trip and visited the cliff dwellings at Tonto National Monument, and then drove back to Apache Junction along the gravel track that is Arizona Highway 88. Along the way we shot a few photographs. The road winds in and out of three major canyons as it traverses the interior of the Superstitions. From the Roosevelt dam it climbs up and over one ridge and drops into the Canyon Lake Drainage. From Canyon Lake, it heads for Fish Creek, which is absolutely spectacular. Unfortunately we didn’t get to see much of it, as we spent a little too much time shooting the sunset at Canyon Lake. The light fades fast here in the Arizona desert, and since it was our first time here, we fumbled about looking for good viewpoints at the last minute. The road between Canyon Lake and Fish Creek is arguably the most photogenic stretch of the entire 40-mile road. 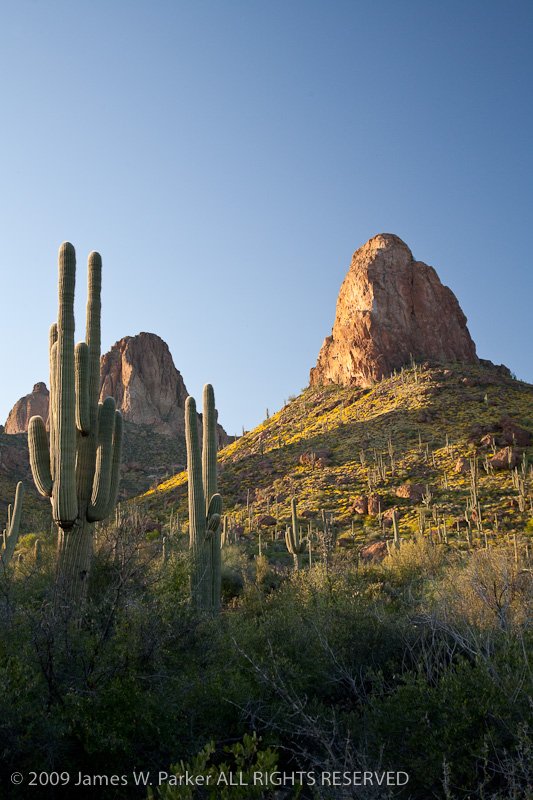 Saguaro and rock formations above the Apache Trail near Fish

As the one and half lane gravel road heads into Fish Creek Canyon, it appears as if you are in a box canyon. Doesn’t look like there is any way out. Then you look up and see, halfway up a sheer canyon wall, a tiny little yellow highway sign. Yup, the road climbs the side of the canyon wall. The guardrails are really just there for show, as they are flimsy as all get out. You really don’t want to take an RV up this road, or down it, for that matter. There is no room to pass, but there are a couple of pullouts near the blind curves. It’s a sheer drop to the creek below, about 1500 feet or so. Absolutely spectacular. Have I said that before?

The two shots below were made at the one pull-out at the top of the canyon, before it switchbacks into the next. It was about an hour after the sun had gone down, with just a trace of daylight left. I used a tripod and a thirty second exposure, with my ISO set to 50 on a Canon 5D. I wasn’t surprised that the shots show the canyon, but the lack of detail resolution is an interesting artifact of the low light. The sensor picks up minute changes in luminance, so it looks like it might have been shot at civil twilight, but closer examination shows no real detail. Interesting. 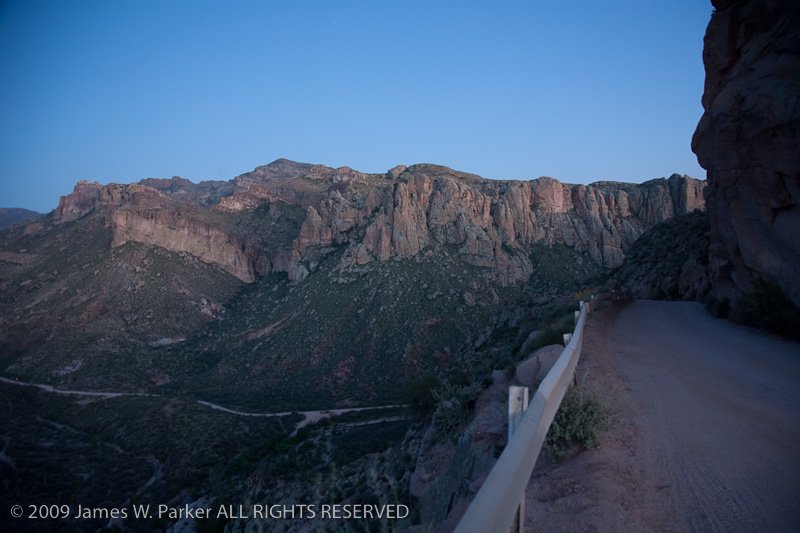 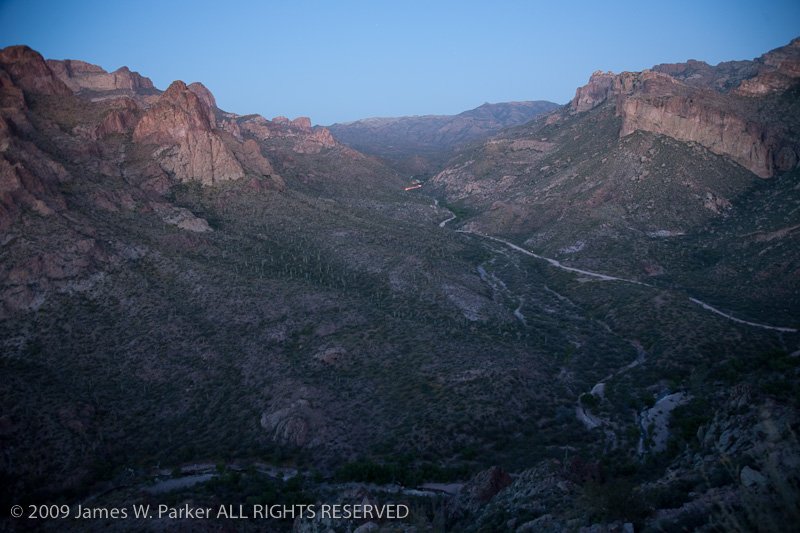 Looking the other direction about an hour after sunset

I also hiked in Peralta Canyon this past week. Lots of rhyolite, sandstone and caliche as you head up the trail. It’s a popular trail, and an easy walk to a saddle where you can see the impressive Weaver Needle jutting above Boulder Canyon. Lots of cactus, too. Cholla, saguaro, prickly pear, agave, sotol, teddy bear… it’s all hard on bare flesh. Long pants are hot, but highly recommended for any bushwhacking you might choose to do. The orange mallow and brittle bush was starting to bloom, too. Saw mountain aster, prickly pear blooms, and other purple stuff that I couldn’t identify. Pretty. I’ll be going back again one of these days.

One side note: when I got back to the parking lot, there was an odd lump on top of a post. I went over to investigate. It was an automatic pistol in a holster. Not sure how it got there, and I know it wasn’t there in the morning when I set off up the trail. I left it for whatever nefarious person or pickup it was intended for. Scary, a bit.

← Previous Link: Tempe Festival of the Arts - what's going on here? Next Link: Gotta love a girl with a duck on her shoulder →