My wife was right – it’s a two-bit show in a ten-cent town. 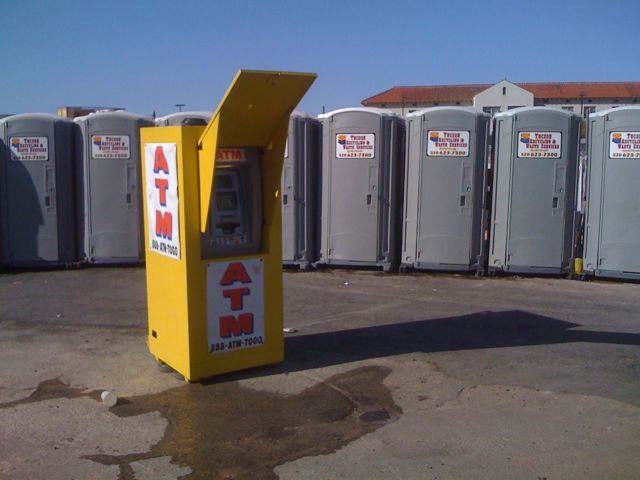 I hate to say it, but Karyn was right about the 4th Avenue Tucson Street Fair. After three days of watching mindless drones, tattooed zombies and uneducated high-school dropouts stream past my booth, I must admit that this is not my venue. Some artists did well here. I did not, I’m sorry to say. I decided after making a few bucks here last year to give it another shot, against my better judgement, and the judgement of my better half. 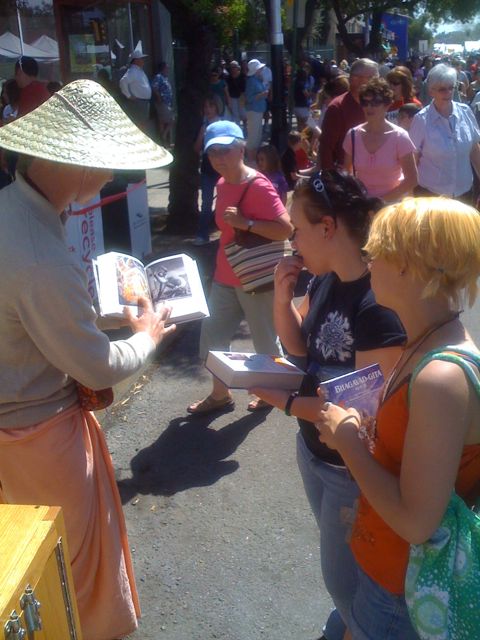 There are many things to like about Tucson. The 4th Avenue district is not one of them, unless you like filthy streets; homeless denizens; doe-eyed cultists hawking the Bhagavad Gita; and scores of fat folks horking down turkey legs, barbecue skewers, cotton candy, kettle corn and corn-on-a-stick. Very little art was exchanged for money. The main reason for this is that the money in Tucson stays home. Those with little or no money come out in droves for the free entertainment provided by the few fine artists in attendance, or to pick up cheap trinkets and trash from the buy/sell vendors.

It isn’t for lack of attendance that this show fails to support the fine artists on the street. Estimates by the show promoters run to 300,000 over the three day period. It’s mainly lack of interest in any sort of culture higher than a Chainsaw Massacre tattoo, or cheap imitation sunglasses . I understand that some fractal art did very well here. It’s that kind of crowd. They pile down the street in wolf packs, eyes straight forward, juggling babies (also tattooed — not kidding!), beer and cigarettes. When they get to the corner of 4th Ave and Sixth Street, where traffic is still allowed to barrel through the traffic light, they stop. Some folks rush to the head of the line to be the first to cross when the police allow it. A few of them come inside my booth to look at art. When the light changes, Johnny says to Jane, “Hurry yup hunny, we’ll miss the light!” And off they go. 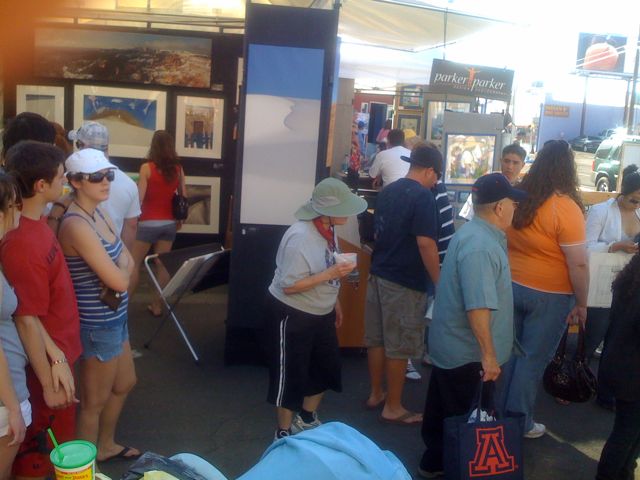 Boy it sure takes longer to cross the street than it used to!

Even the poster artist, Lary McKee had some sad experiences to share. One couple stopped by to congratulate him on his painting of the 4th Avenue trolley, which was reproduced on posters and t-shirts. He said that he’d be happy to autograph a poster for them. They asked him how much a poster cost, and he replied, “Two dollars”.

The couple shook their head, and said, “Oh, that’s too bad. We can’t afford that.” Sad, but true. And they were very representative of the crowd. No one had two nickels to rub together.

The show promised Lary a supply of posters and t-shirts — as many as he wanted, they said, in exchange for the original painting and a free booth space. It was a nice space, too, right on the corner of 4th Avenue and Sixth Street. Worth about $500. The painting would have been sold for about $2000, which is what Lary gets for his originals. So a few poster and t-shirts would have been a nice addition to the publicity Lary got. But the shirts and posters never showed up. At the end of the show, Lary went by the FAMA office, and they were able to scrape up 4 posters. All they had left, the woman told him. 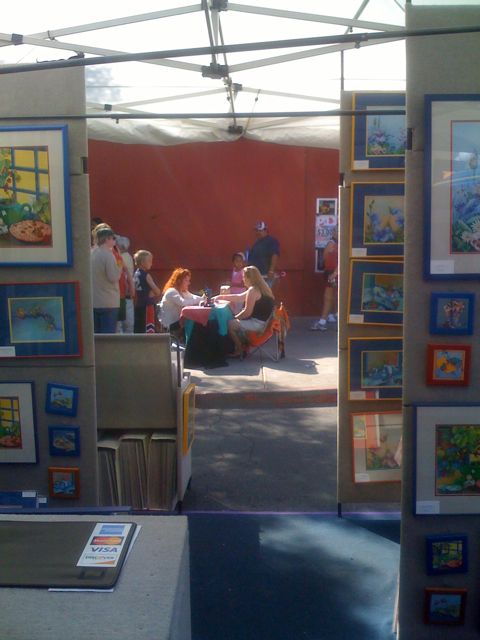 It’s sad that such a wonderful area like Tucson can’t support a better fine art show. This one is filled with junk art, buy/sell, bad food, and crappy street musicians hired for their ability to play the same tune over and over for three days non-stop. We had fortune tellers, bad ukuleles, stilt walkers, Uncle Sam in drag, bikers, bouncers and babies. The locals must like it though, since they’ve been coming on down for forty years. I’m not sure that the majority knows what they’re missing. And on the positive side, we made some wonderful new friends, and enjoyed the beautiful spring weather here in Tucson. I spoke with several interesting people who fell outside the bell curve, and actually had intelligent questions and comments about my work. I talked geology, photographic technique and best weekend getaway spots with some very nice folks. But I didn’t sell enough work here to even remotely justify returning again. 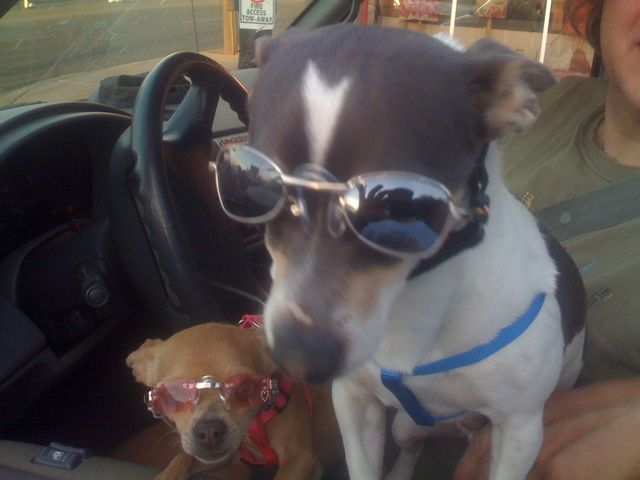 They come in every size

The show itself is logistically challenging. Setup is the day before, and the east side of the street must dolly in, sometimes as far as two or more blocks. The show provided “free parking”, but it’s at a city garage over a mile away, accessible via shuttle, and doesn’t have enough clearance for larger trailers or RVs. They did provide information on two private vendors who sold parking for the weekend for about $100. Not bad, compared to Chicago prices, but for craft artists who were used to parking for free in previous years, this was a significant blow. The show could have worked harder to help those with trailers and RVs park within a reasonable distance for free. We chose to pay the vendor and leave the trailer overnight from Thursday through Sunday. The dolly to our booth wasn’t bad — only a block and a half. It takes us about 8 heavy loads, over gravel, broken glass and busted sidewalks. 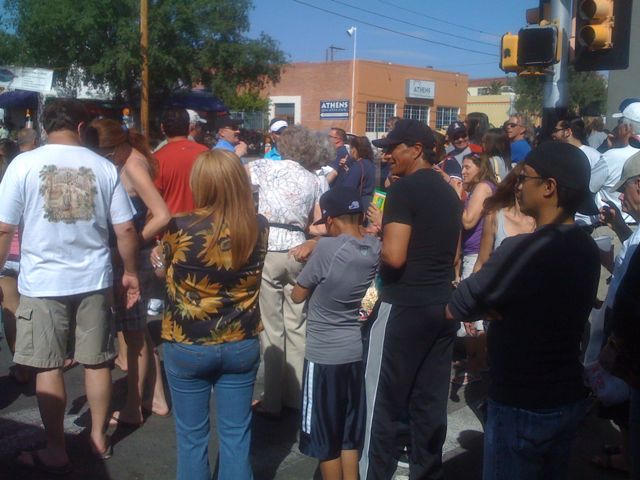 Don’t Mind Me, I’m Just Waiting for the Light to Change

The load-out is worse, as it happens mainly after dark. The policemen who were directing traffic and keeping the attendees safe during the show melted away at dusk. No one controlled traffic at the intersection of the 4th Avenue and Sixth after about 6:30PM. The streetlights were out all along Sixth, and the parking lot was dimly lit. There wasn’t much security in the lot, although we did notice a police cruiser lurking. Good thing, too, as there are some seriously shady people in this neighborhood. The thing that bothered me most though, was the filthy condition of the streets. Broken bottles, trash and boarded up doorways. The 4th Avenue shopping district is a throwback to the 60’s, with its tattoo parlors, tie-dye dresses and paraphernalia shops. Lots of homeless people in doorways. 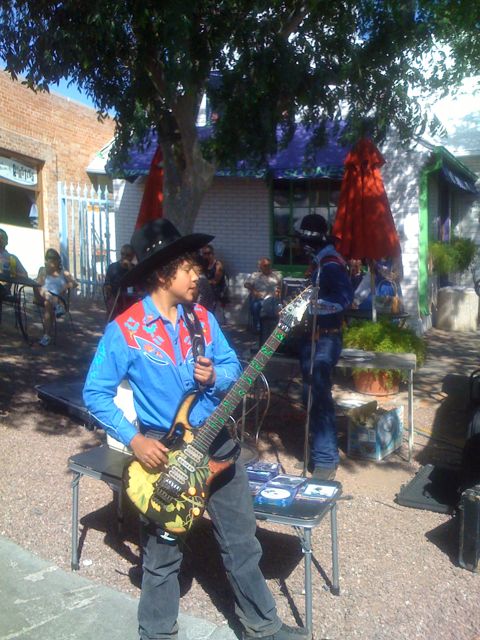 Hired for ability to play the same tune for three days

To their credit, the show does provide booth sitters and free water and lots of snacks throughout the show. Volunteers bring a wagonload of goodies by each artist’s booth three or four times a day. The water is welcome, as it is hot and dusty here in Tucson. The award (there is only one) is sort of a joke, too. Best of Show, as judged by “interaction with the public” is awarded a “handsome plaque” and a free booth space in next year’s show. We didn’t find out who that was, and never saw or interacted with any judges. Maybe they judge on how interactive your slides are?

Anyway, I probably won’t be back for this show again. I gave it two chances. It failed on almost every count. Warning to fine artists: stay the hell away from this show. On the other hand, if you’re selling cheap Corian cutting boards, canvas giclee paintings made in China, or doggie sunglasses, you’ll be welcomed here by the hoi polloi. You may even get rich. On the other hand, I will spend some time getting to know the real Tucson. I’m pretty sure that 4th Avenue isn’t the best example of Tucson culture. Just one example.