The story behind the shot 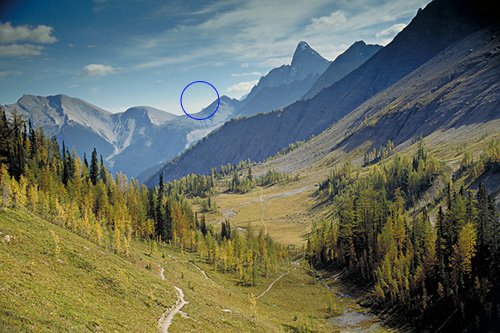 Numa Pass, in the Canadian Rockies

The Freedom of the Hills

Often the difference between selling a beautiful image and just talking about it is the story behind the shot. One of the tricks I’ve learned is to display a small tag next to each framed image that gives the title, the location and available sizes and pricing. I know that some photographers go into more detail about where the shot was made, how it was made and other details, but I prefer to speak with people and give them the story in person, whenever I see that someone’s taken an interest in a particular picture.

On the web, though, it’s a different story. My galleries are designed to carry the same minimal information. Sometimes this can be a problem, as I’m not present to talk about how beautiful the light was that morning, or the circumstances leading up to the shot. I don’t want to muck up my online galleries with too much copy (after all — it’s a visual medium), so I thought that I’d periodically add some stories instead, here in the blog.

The story I probably tell the most is the story behind my signature image, “The Freedom of the Hills.” I was backpacking in the Canadian Rockies wtih two friends, along the Rockwall Trail in Kootenay. We’d been up high for three days, and had spent most of the day climbing Numa Pass before descending to Floe Lake for our last night in the backcountry. It was a glorious afternoon in early September, and the larches were all changing color from evergreen to yellow. Bluebird sky, we decided to hike up the flank of Mt. Foster for a better look into the Floe Lake drainage. We left our packs trail side and scrambled up the scree. The shot above was taken the day before, as we descended Tumbling Pass into the Numa Creek drainage. “Freedom” was shot at the prominent saddle on the skyline — usually when I point out the exact location, it causes a bit of jaw-dropping!

After getting a good look at our destination, my two buddies slid back down to the trail. I paused to get a good shot of Numa Peak. As I was framing up the shot, Jim Tocco walked out of the shadow at the bottom of the frame, paused facing me and held his arms in the air. It was a wonderfully defining moment. The shot shows the scale of the mountains, the sky and trail, but, more importantly, expresses my feelings about being “high and wild” more than any other shot I’ve taken before or since. It wasn’t posed or planned, but just happened.Three frames later, the moment passed, and we hiked down to the lake and a late supper.

Being ready for a shot like this takes practice and a good eye. It doesn’t happen overnight. But it doesn’t take fancy equipment or a 4×5 camera either. It mainly takes talent, a bit of luck and being ready for the moment when it presents itself. Be there now.

← Previous Link: What if they gave a show, and nobody came? Next Link: Off again, on again →