What if they gave a show, and nobody came? 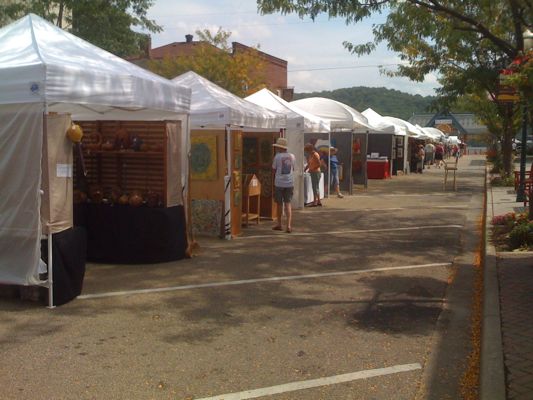 Every once in a while, a new show comes along that looks interesting. The Rising Sun Fine Art and Craft Festival looked that way when it first appeared on Zapp. Most of the shows on Zapp have to have some financial backing, because Zapp costs money to just get it rolling. Rising Sun, a little town along the Ohio River in Indiana, appeared to have the chutzpah and the cabbage to get a show rolling, so I decided to give it a shot. It didn’t hurt that booth fees were reasonable, even cheap, at $100 a spot, plus $40 for electricity. 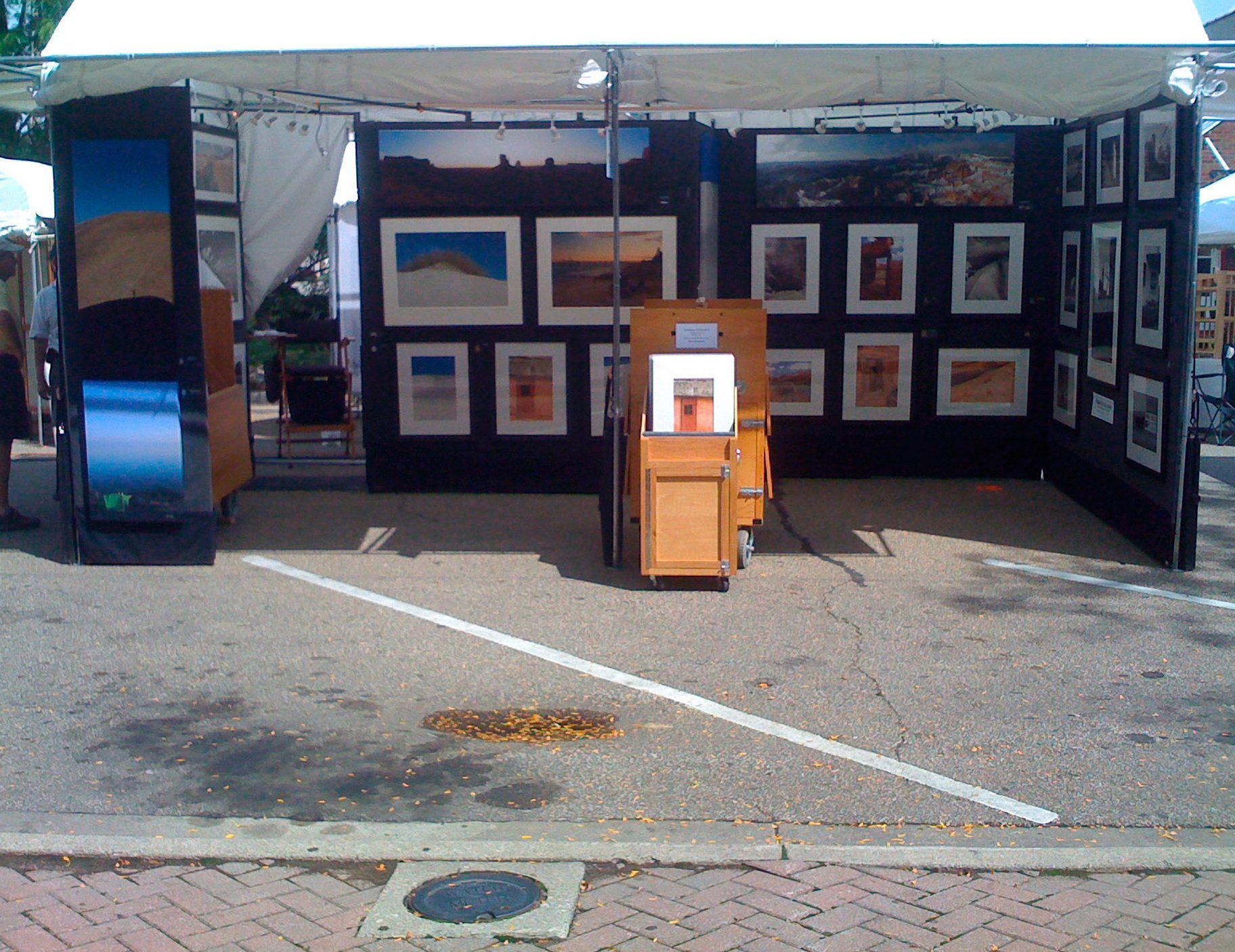 We pulled into town around 5PM on Friday evening, after a six-hour drive from Michigan. Rising Sun is across the Ohio River from Cincinnati, but is about as far from Cincinnati culturally as you can get. Booths were set-up down the center of Main Street, a pleasant tree-lined avenue with restored galleries, restaurants and stores along its length. We had no trouble pulling the Artanic alongside our double space and unloading. The two booth spaces to the north of us were vacant, and we assumed that they were planning to setup in the morning. Other artists were already set up and ready to go, including a painter behind us. Booth spaces were generous, with 5′ between booths and about 5′ behind for storage. Since we had a double, we ended up with about 35′ of frontage. I was able to put awnings on both sides of the booth, and display a ton of work which I hadn’t planned on. After setting up, we passed on the artist reception (champagne, desserts and harp music) in favor of some delicious Mexican food at the restaurant right by our booth.

Saturday dawned clear as a bell. We finished hanging the art inside and outside the booth, raised the awnings and waited for the hordes to stampede down the street. The two spots next to us remained vacant. I went down to the artist hospitality center which was serving coffee, fruit, cereal, Jimmy Dean breakfast “samwitches” and picked up not one, but two free t-shirts and a whole bag of goodies, including an ice-scraper. Hmmm, what am I going to do with a Rising Sun ice scraper? We continued waiting for the mad crush of patrons aching for art. Karyn walked the show, and counted 14 no-shows. The weather report scared many of them off, as predictions for rain fall-out from Hurricane Ike had indicated 50% or greater chance of rain both Saturday and Sunday. The rains never came, but then, neither did the customers.

A judge came by the booth. Ron Monsma, a professional artist and teacher from South Bend, spent quality time with each artist, asking intelligent questions, and looking at the work. What a breath of fresh air, and a contrast from the “drive-by” judging prevalent in so many shows. He took his time and took copious notes before leaving my booth and visiting my neighbor’s booth. The customers stayed away.

Later in the afternoon, the heat and humidity drained most of the remaining energy from the artists and the show. The few customers were pleasant and gracious, and show volunteers kept bringing water to the booths. I didn’t see a lot of packages walking down the street. Actually I didn’t see many people at all. There seemed to be more artists and volunteers than patrons. I did sell a couple of small prints, though. I had exactly two customers on Saturday. Debby Abrams and the judge came around handing out the awards. One of the nice things about this show was the generous prize money — about $8,000 was handed out in Merit  and purchase awards. We started closing down the booth at 5PM, thinking that once again, we hadn’t won anything. But at 5:15, Debby came by with a big blue ribbon and a nice check. I was pleasantly surprised by the amount of the award, which was 1st place in the 2-D category. 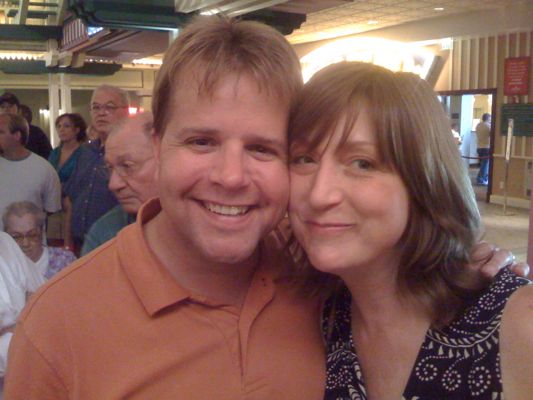 Doug and Angie at the Grand Victoria

That evening, we went over to the Grand Victoria Casino Riverboat to celebrate with our friends, Angie and Doug Dresie, jewelers from Cincinnati. We had a great dinner (highly recommend the buffet on Saturday night there — steak and crab legs), and then tried to increase our art show earning by playing the slots. This didn’t work very well.

Sunday the forecast was for high winds to reach us from the remnants of Hurricane Ike. Many of the artists were nervous about the 45-50mph gusts that were predicted. The show never really opened on Sunday morning, although the skies were mainly clear. The show organizer told folks that if they felt uncomfortable with the forecast, that it would be ok to begin loading out. We packed up everything that we could, took down the outside awinings and work, and started carrying work back to the trailer. It was hot and humid again, and by 11, most everybody was breaking down and bringing their vehicles onto the street.  The wind was picking up, but the flow of potential customers wasn’t. If there had been more traffic on Saturday, I think a few of the artists might have stuck it out, but reminders of other shows being blown down made everyone nervous. There were a few people on the street looking at the work, but nobody really buying anything.

So in the end, great organization, good advertising, lots of perks for the artists, great judging and award money all added up to the show that never was. It will be interesting to see if the civic leaders at Rising Sun try this again next year. I’m not sure how they will attract customers. The town is hard to get to from Cincinnati, and it’s almost as close to Indianapolis. With a good crowd this could become a great little local show. But this year it was just a warmup. Literally.

← Previous Link: Art & Apples Award of Excellence Next Link: The story behind the shot →