How a show should be run… 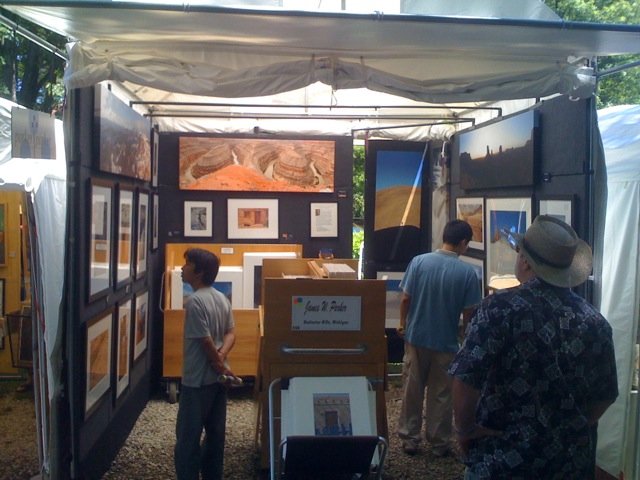 Just got back from the Cain Park Art Festival in Cleveland Heights, Ohio. It’s a great little show in a very different type of park venue in a pleasant residential neighborhood. This show lives up to its reputation of being the most artist friendly show in the country. And that includes the Krasl show in St. Joseph, MI and the Artisphere show in Greenville (written up here). Much of this is due to the hard work and great attitude of the show director, George Kozmon, and the festival coordinator, Honey Feinberg. They both made sure that they were on a first-name basis with every single artist in the show, greeting them during set-up,  remaining visible throughout the event, and staying until the last artist left.

Load-in times are assigned, and for good reason. Vehicles queue up outside the park and are admitted one at a time down tiny little service paths into the lush green ravine that is Cain Park. In the center of the park are a couple of galleries and a small outdoor concert amphitheater. Staff members coordinated this potential bottleneck extremely well, directing each artist to his or her spot. Some spots have space behind the booths, and vans can be parked right there. Others are backed up to a steep wooded bank. Setup went quickly on Friday morning, and after everyone was mostly done, there was a tasty light lunch served at the pavilion. Non-fattening, too.

The show officially opened at 3PM on Friday afternoon, and was free to all comers. This year, the City of Cleveland Heights decided to impose a $2 cover fee on Saturday and Sunday, and it caused some problems at the back entrance of the show. This gate was closed due to a lack of city personnel empowered to take cash and as a consequence, artists at this end of the park may have seen less traffic. In prior years, people got used to parking in the neighborhood and when they walked down the hill and were turned away, it was bad business for everybody. After hearing complaints from patrons and artists alike, George said that they would try to have that entrance open again next year. Change is not always a good thing.

Crowds were good, but buying tends to be sporadic. There were times when I thought I would become rich beyond my wildest dreams, I was so busy. Other times, it was a bit slower. The local audience loves the arts, and they are appreciative. Booths were packed all weekend with browsers. Saturday, the weather turned ugly around 1:30, and the rains poured down. We were prepared — this is one reason to get an iPhone — you can check live weather radar. Most everybody buttoned up and rode it out, but the rain highlighted the one major flaw in Cain Park. 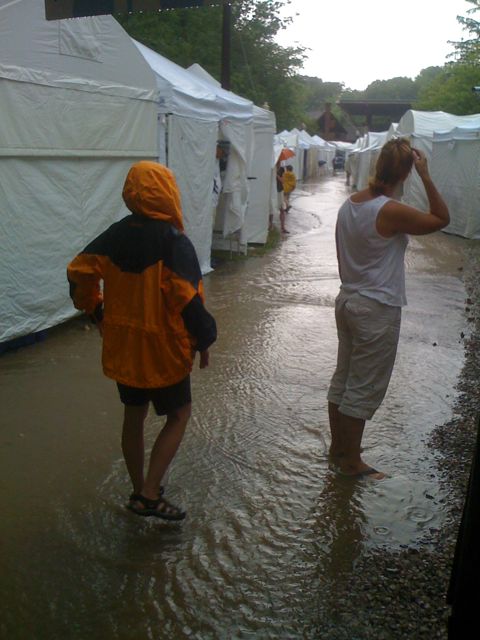 Since the park is at the bottom of a small ravine (and the site of an old stream bed), when it rains the water seeks its old course, which includes some of the lower-level canopies. Many artists struggled with inches of water, muddy paths and gunk in the booth (that’s a technical term). And here is where the staff truly showed their mettle. They worked like dogs staying on top of it. They brought golf carts of fresh mulch to fill in soggy spots. They broomed away the excess water once it stopped raining. They relocated at least one artist that I know of because the booth became unworkable. And the miracle was that the crowds came back once the rain disappeared. George was on the PA system with bright encouraging words, and his salesmanship is truly one of a kind. You had to be there to believe it.

Sunday was a gorgeous day. It dawned cloudy and rainy, but the show didn’t open until noon, so that the artists could take a little time off for a lovely breakfast at the pavilion and participate in the award ceremony. Several awards were handed out, including an artist-selected favorite. Ribbon winners are invited back next year. Sorry to say I didn’t win one!

But everybody was a winner at this show — even though sales weren’t as spectacular as they could have been, and the weather didn’t cooperate as nicely as it might have. And the reason for this is the show staff. George and Honey pay attention to the smallest details. They are visible throughout the show, smiling and making sure that everyone is doing ok. George makes announcements over a special PA system about every two hours, letting people know what to expect. The show staff (not volunteers) compete with each other to see who can be the most helpful, shovel the most mulch, carry the biggest load or answer the most questions. Honey walks the aisles echoing the legacy of the late Harvey Feinberg, the previous show director. Everyone goes out of their way to make the artists and the patrons feel welcome. Unbelievable. Thank you Cain Park, for a wonderful show.