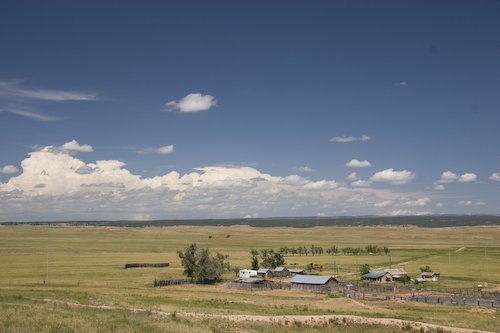 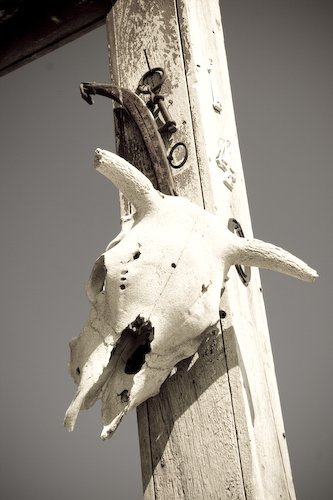 Skull on a hot pine board

Just got back from Rapid City, the city of my birth, the city where my parents still live. My sister and her husband were out there, as was Karyn, the quintessential cowgirl. She once told me that she never wore blue jeans until she met me. But I digress.

Took a few days off to visit with family and to shoot some ghost towns, prairies, long lonesome vistas, things like that. Trouble was, smoke from forest fires in Saskatchewan obscured the sky for the first three days I was there, it rained on and off most of the week, and I only got a few shots off. Weather-wise it’s been a strange, strange year. I feel very blessed that we’ve had comparatively good weather, compared to the shows in Omaha, Evanston and other places that were hit hard by high winds, micro-bursts they call them. Wow. At Crosby Gardens, we had a few hours of rain, but it just drove folks into the booths to look at art.

While I was in South Dakota I did get a chance to visit the town of Fairburnn. Fairburn is south of Rapid City and sits on the eastern edge of the Black Hills. It’s fairly populous, about 70 in all, and the railroad runs through town. About half of the town is beat up and abandoned, and the other half is quite well-kept. Farms are dotted round the outskirts, and the school still keeps the kids out of trouble. Some communities on the edge of the plains aren’t so lucky.

We also had supper with some old friends, David Lamb and his long-time partner Andrea, who used to run the chain-saw shop in Hill City. Dave and Andrea have been working on their second ranch down near Newcastle, drilling a well deep into the Madison formation (1800′ down!) and running water to their small herd of cattle. Karyn and I ran out there to photograph the Lauzon school, saw Dave’s truck, but no sign of the two of them. Nice ranch. Their ranch near Rapid is also quite prosperous. 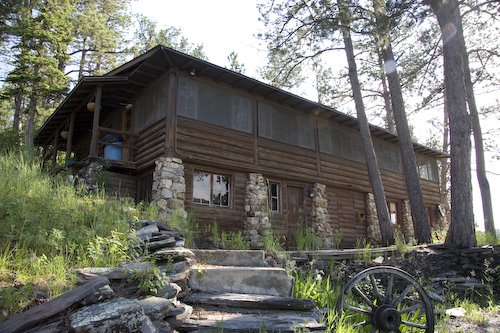 And lastly, I went up to Palmer Gulch, where I grew up, and took my first photographs. It’s now a monster KOA campground, with tent cabins, lots and lots of campers, many many fires and a huge sewer right in front of our old friends the Hines’ cabin. Ugh. I did shoot a few pictures and told a few lies to some tourists that were staying in my grandfather’s old home, now turned into a motel room. It’s true that you can’t go home. I was glad to take another look, even though it disgusted me and made me sad. We still own the property at the bottom end of Palmer Gulch, and my siblings and I stay down there when we visit.

But now I’m back in Michigan, and you can catch me in Cleveland or Ann Arbor in July.

Read more about the history of Palmer Gulch Lodge: The Happy Valley

Archive | Life on the Road | Outdoors

← Previous Link: Tuesday morning, this must be Detroit Next Link: How a show should be run... →