I had an interesting experience at the Tempe Art Festival last weekend, one that I thought raised other issues as well as the one I’m about to describe. My booth was set up on a small side street off of Mill Avenue, the main shopping district in Tempe. Another artist, also a photographer, was set up with a double booth. She had done the show before and was able to answer a couple of my questions about the show, which was helpful, as we had not been in Tempe before. The set up itself was confusing, and most of the volunteers had no idea what was going on — just getting to the location took time and patience, and I very nearly took out a booth more than once with the Artanic.

Friday morning, the weather was perfect for an art show. We were at the end of a small side street, which is usually the kiss of death for sales, but there was an elegant jazz stage and the Arizona Wines tasting area across from us. A large parking lot also brought customers by the booth, so I wasn’t too worried about foot traffic. But what did worry me was the photographer across the street. She had plastered several crude signs on her print bins: “Going Out of Business — 50% Off Everything”. This type of blatant self-promotion is not allowed at most high-end shows, and Tempe has a clearly stated rule against it.

We watched all weekend as customers swarmed the booth, buying multiples and large framed work off the walls. More stock appeared. More prints went home with happy customers. Meanwhile, at the end of the street, I had many wonderful conversations, and many interested patrons. Until they discovered the sale booth down the street. This went on Friday and Saturday. On Sunday, the markdowns continued. The signs had been changed to 70% off! I thought to myself, why not just give it away? 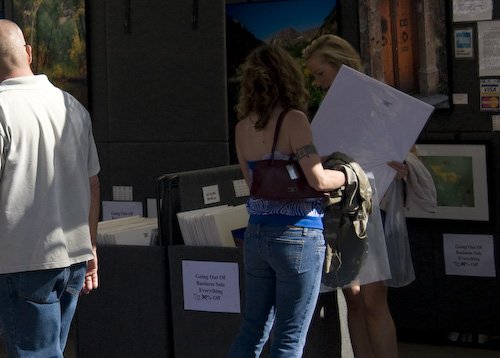 Photographer goes out of business, gives away work

The other artists on the street were also dismayed — one neighbor agreed with me that it just wasn’t right for the photographer to blatantly disregard the rules. A painter wondered if they had created extra stock to make up for the money lost by giving it away. You know the old saying, “Sell at a loss, but make it up in quantity.” When one artist devalues their work so much, it tends to devalue everyone else’s work as well. I’m sure that the woman and her husband thought about this, as she apologized to me for doing it. I love you means never having to say you’re sorry, I guess. Pfooey.

We as artists can’t control how other artists choose to value their work, or the price points at which they sell, but we can speak up when somebody violates the written rules of the show. I finally called the festival hotline on Sunday, and spoke to one of the show directors about the situation. I asked if the show had any restrictions on “fire sale” selling. She told me that while it was prohibited, that it might be okay if I “didn’t bark”. I said that it wasn’t my sale, but the photographer across the way, and that they had large signs proclaiming the sale. Obviously it was too late to do any of the artists on the street much good, but I felt better anyway. The woman I spoke told me that she was glad I mentioned the issue.

It would have been better for everyone if the sale prices had been marked on the pieces themselves, and the artists had mentioned it to customers who stopped in. Were they so lazy that they couldn’t make new price stickers? Instead they chose to Walmartize their booth, and drag down the rest of the street as their business failed. She knew it was wrong, but she and her husband did it anyway. To top it off, their web site says nothing at all about going out of business. Looks as if they will continue to sell prints at full price and to do workshops.

What I find especially disturbing is that other artists have no compunction about breaking the rules in order to gain unfair advantage. It is no different than the big business world many of us tried to escape when running away to join the circus. Unfortunately, there are those of us that still have high standards, and are forced to compete with low-life dirty pond-sucking scum. Such is life. After the show was over, and we all stood around counting our wads of cash, I made enough money to fill the tank and get to the next town, so I guess it worked out all right, but it certainly left the taste of rat in my mouth when I was hoping for steak. <End rant>

A big thank you to all of the patrons who felt my work was worth the price they paid! Happy Trails to you!