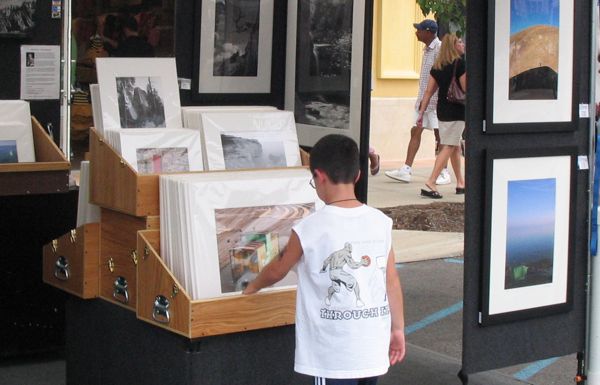 I’m always looking for new ways to transport and display my work at shows. A few weeks ago, I replaced my old bins with some new boxes that I built of 1/2 birch plywood. The new bins are a little larger and sit on top of a square support system. More on that later.

I built four bin boxes. The first two I built were just a tad too small to fit my 11×14’s with space to clear. I miscalculated somewhere, and made them almost exactly 14” tall on the inside. That’s not enough clearance to allow the prints to ride comfortably. So I built a couple more and made them a tad taller, and also raised the front a little.

I had a family in the booth a couple of weeks ago, and one of the teenage girls was paging through the front bin. She didn’t support the prints with her hand, and let them all fall forward. It tipped the entire bin over, and spilled the prints into the street. Nothing was damaged except for her pride and one mat, which had a bit of a divot taken out of it. A fix to keep them from tipping over is in the works. A simple bar to fasten the front and back lower bins together is all that it will take.

The beauty of this design is that the two halves of one box fit together and clasp shut to transport the prints in the trailer. Almost no packing up is necessary. The large prints go back into a separate carry box which doubles as a desk. (See Art Show Booth).

I also built a smaller box to support a bin at a second level. While this box is big enough to carry prints, it usually just holds the tent toolbox and parts during a show, and after. It’s narrower than the others, and has cleats on the bottom to keep it from falling into the supports. The supports themselves are just ProPanel extenders, with leg levelers on the bottom. They assemble just like the KD panels, with metal posts and corner brackets. Velcro straps keep them together and the corner brackets keep them square.

← Previous Link: Is it Art or is it Fine Art? Next Link: How to frame a canvas print →